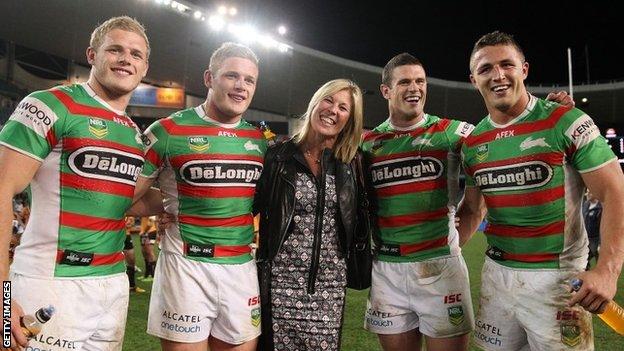 The mother of the three Burgess brothers selected for England has spoken of her "heartbreak" that eldest son Luke failed to make the World Cup.

Sam, Thomas and George, who, along with Luke, play for the South Sydney Rabbitohs in Australia, made England coach Steve McNamara's squad.

However, prop Luke, the eldest brother at 26, failed to make the cut.

"Julie calls them her 'little lads' but the four Burgess boys are absolute beasts. Sam was always the big talent, breaking into the Bulls team as a 17-year old. Eldest son Luke made it in Super League after Sam. The big prop was known as 'Biffa' as he tried to make it at Leeds but has only really flourished since moving to the Rabbitohs. While Sam and Luke were playing Super League, young boys George and Tom were growing and flourishing in the Bradford academy, and I remember being told 'just wait 'til you see the twins - they're even bigger!'."

"It's so disappointing that Luke's not in there. That was a heartbreak and I don't understand it," said Julie.

"He's dealing with it - which you have to do - but you have to understand it's such a huge disappointment to see all your brothers go back to England and not be part of it. It's really hard as a mum to know what to say."

Despite son Luke's setback, Julie, who now lives and works in Sydney, is pleased for her other three offspring and sees no reason why they cannot help England win the tournament, which starts on 26 October.

"I'm delighted for Thomas and George as it's their full international debuts and it's amazing that Sam is back after years of injury," she told BBC Radio 5 live Breakfast,

"The England squad that's been picked will definitely be in with a chance.

"I sadly won't be over to watch as I've got to work, but I'm pretty sure we've got a really strong chance of competing against the top sides."

The Burgess brothers have made history as it is the first time that three siblings have been included in an England squad.

Twins George and Thomas, 21, are also the only uncapped players in McNamara's party of 24.

Prop Sam, 24, began his career at Bradford Bulls in 2006 before Rabbitohs co-owner Russell Crowe, the film actor and producer, signed him for the 2010 season.

Fellow forward George was offered a contract with the club after impressing for England Schoolboys against Australia and made his Rabbitohs debut in 2012.

Luke, who will remain in Australia while the World Cup is on, made his name at Leeds Rhinos before joining the Rabbitohs in 2011.