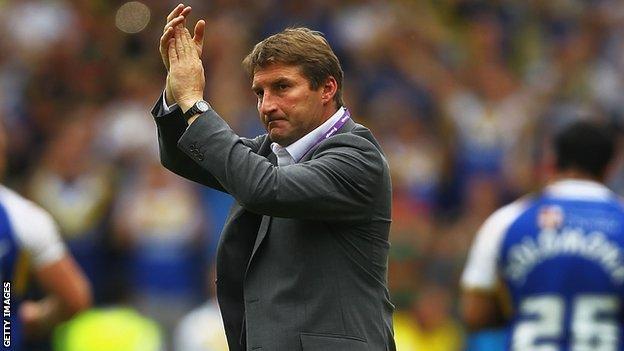 The Wolves face Wigan at Old Trafford on Saturday searching for their first title since 1955, as the Warriors hope to complete a league and cup double.

"We got beaten by the Rhinos but it was nip and tuck for around 60 minutes," Smith told BBC Sport.

"The players have more experience now. I hope we will be better for it in handling the pressure of this game."

Aussie Smith, the former Leeds and England boss, is looking to become the first man to lead two different teams to Grand Final victories and feels Warrington were not that far away last season.

"When you coach a team and work them hard, you have faith in them, you can prepare them to play against anybody," he said.

"We haven't done too much differently in our preparations this time around. There is not a whole lot to change."

Warrington came runners-up to Huddersfield in the regular season, while Wigan finished in fourth place but Smith, 46, says that both sides deserve their place at Old Trafford.

Paul Anderson's Giants side experienced an outstanding season, finishing top of the league for the first time since 1932 and also seeing captain Danny Brough win the Man of Steel award, but Warrington got the better of them in their semi-final.

"Wigan and ourselves have been two of the best teams so for us to finally see each other in a cup final, everybody is really excited about it, " said Smith.

"'Moz' has the respect of anybody that I have met. He is a gentleman off the field and plays it rough and tough on the field.

"I am delighted for Moz to be signing off his time at Warrington in this manner and hopefully he can do it with a trophy but if not, he should be proud of what he has achieved."

"It will be a really good game, we have had some terrific battles with them over the last few years so it is a mouthwatering prospect.

"There is a real rivalry between the two clubs and both have been up there and performed consistently for the last three years.

"The atmosphere should be terrific at Old Trafford, not just from the fans of the supporting clubs, but the neutrals too who come out in their droves."

Warrington captain Adrian Morley will be making his last appearance for the Wire, as will Wigan full-back Sam Tomkins, who has signed for NRL side New Zealand Warriors.

Smith describes Tomkins as a "high quality player" and is aware of what to expect from his opponents.

"Wigan put out a really solid performance against Leeds, going through their processes and they play in a fairly structured way," he added.

"They rely on that and execute it well. That will be one of the challenges for us. There is a real contrast in the way the two teams play and that is what makes our match an interesting one."