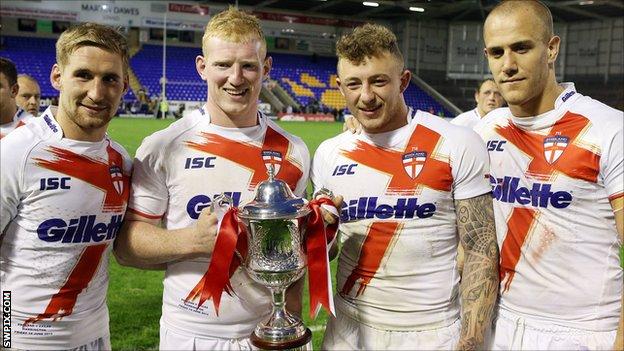 Tomkins is joining New Zealand Warriors and Mossop is off to Parramatta Eels.

"I'm fortunate I am in the World Cup squad so it won't be the last time I see them," Farrell told BBC Sport.

Farrell could get an early taste of what awaits club side Wigan in the World Club Challenge when the World Cup starts.

England open the tournament against Australia, who could feature a number of players from NRL Premiership winners Sydney Roosters in their squad.

Super League's winners usually face a one-off match against their southern hemisphere counterparts, but the competition could be expanded in 2014 and possibly taken to Sydney after 14 years in England.

"Now we've got a chance to be in the World Club Challenge and it's another one for us to tick off again," Farrell said.

"There's a lot of quality over in Australia and hopefully we'll get a trip to Australia depending on where the game is played."

"We'll do all we can with England and hopefully come away with a World Cup victory as well."

The Warriors became the first team since St Helens in 2006 to achieve the double in the summer era.

And the feat ranks them alongside the double-winning Wigan sides in which their coach Shaun Wane played during the late 1980s and 1990s.

"It barely ever happens. It's not been done since the Challenge Cup moved to the end of the year and we've made history now," Farrell added.

"It made it extra special knowing that this team won't play together again now. We've won everything we could do - a Challenge Cup and a Grand Final. Not many teams do that."

Farrell's World Cup selection comes at the end of a impressive campaign in which he was a contender for Man of Steel and made a non-representative debut in the Exiles game at Warrington in June.

Club form saw him rack up 12 tries in 27 league games, his best figure since breaking into the Warriors side and put him in the frame for an international debut at rugby league's biggest event.

"All the personal accolades I'd shove to one side any day and take away what we've got now," Farrell added.

"Just to be involved in the World Cup will be a big thing for me, and I'm looking forward to it."