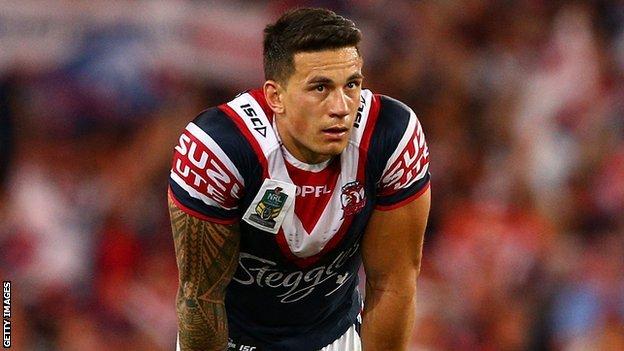 Sonny Bill Williams will not feature in New Zealand's defence of the Rugby League World Cup after telling selectors he had "other commitments".

The 28-year-old, who helped the Sydney Roosters win Sunday's NRL Grand Final, is tipped for a return to rugby union.

Sonny is unavailable due to other commitments. What they are at this stage, I'm sure we would all like to know

However, four of his Roosters team-mates have been selected, including ex-Hull FC prop Sam Moa.

Moa, 27, has eight caps for Tonga, including against Samoa in April, but has opted to switch nationalities.

Williams started his career in league, winning an NRL title with the Canterbury Bulldogs before quitting to play rugby union in 2008 and helping the All Blacks win the 2011 World Cup.

He made a return to league but is now thought to be pondering a move back to the 15-man code.

"Sonny is unavailable due to other commitments," said Kiwis coach Stephen Kearney. "What they are at this stage, I'm sure we would all like to know and I'm sure we will hear all about that over the next two or three weeks."

Along with Moa, Roosters winger Roger Tuivasa-Sheck has been given a first call-up by coach Stephen Kearney.

But club-mate Shaun Kenny-Dowall will miss the tournament because of a fractured jaw he picked up in the Grand Final.

Jeremy Smith is absent for personal reasons, while Benji Marshall, so long a key figure in the national team, signed in the summer for rugby union's Auckland Blues.

However, ex-Wigan half-back Thomas Leuluai and Greg Eastwood, who had a spell with Leeds in 2010, are both included in the 24-man squad, which will be captained by Simon Mannering.

The Kiwis will play the Cook Islands in a warm-up match at Doncaster's Keepmoat Stadium on Sunday, 20 October.

The side, captained by Brent Kite, will face Scotland and Italy in Group C.