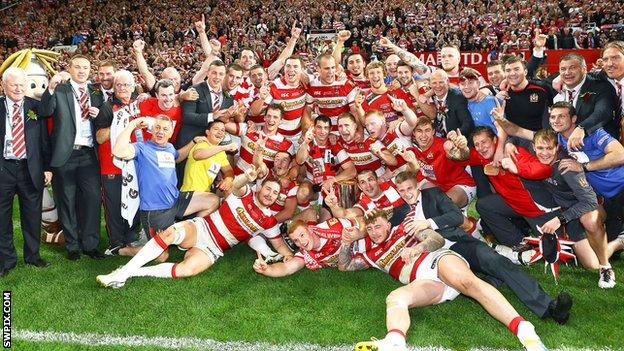 Discussions regarding the future structure of Super League have been postponed until after the World Cup.

The Rugby Football League was due to present final plans to on Wednesday.

But at a meeting of Super League clubs on Monday, organised by Wigan chairman Ian Lenagan, many voiced concern at the

In particular, there were worries that the restructure would weaken the financial position of Super League.

Under the new proposals, a new league comprising two divisions of 12 teams would be introduced from 2015, with automatic promotion and relegation returning in place of the current licensing system.

Although Championship clubs voted in favour of the new structure, it was thought the Super League clubs had also backed the plan - but Lenagan is unhappy that no vote was actually taken on the proposal and called for Monday's meeting to draw up a response.

He also feels that the RFL has not done enough to market the game and bring in additional income with the Super League having not received any sponsorship money for the last two years.

In addition, Lenagan wants Super League clubs to be given a greater say in the future direction of the sport, with representation on the currently independent board of directors.

The move is seen as a vote of no-confidence in the RFL and its chief executive Nigel Wood.

A statement from the RFL said: "A majority of Super League clubs have indicated an interest in further consultation on the detail of the proposals in order to reach the best solution.

"These discussions will continue to positively progress but all parties involved are unanimous in their belief that the key focus for rugby league at this moment is staging a successful Rugby League World Cup 2013 and this should be the focus of the sport."

However, Leeds chief executive Gary Hetherington, who did not attend the "rebels"' meeting, confirmed the Rhinos would have backed the RFL recommendations had Wednesday's meeting gone ahead.

"Although there hasn't been a vote, clubs have expressed their preference so I would have expected the meeting to be a simple rubber-stamping of what has gone beforehand," Hetherington said.

Sheffield chairman Ian Swire, whose side have won the last two Championship Grand Finals and would have been promotoed to Super League but for the licensing system, is still hoping for the return of promotion and relegation from next year.

Swire, who also anticipated a rubber-stamping of the proposals at Wednesday's meeting, said his club were ready to back the RFL plan after initially favouring a league with four divisions of 10 teams.

"At the last meeting of Championship clubs in July, we voted for four 10s because we thought that was the sensible way to go, but we were outvoted 15-1 so we agreed to go along with the majority," he said.

"We thought it was a fait accompli and then we found out on Monday night the Super League clubs wanted a rethink. Why did they wait until now, just before the World Cup, to let their feelings be known?

"If there were rumblings of discontent they could have quashed it all in July if they didn't like it."

The World Cup, which is being hosted by England and Wales, starts on 26 October and ends with the final at Old Trafford on 30 November.