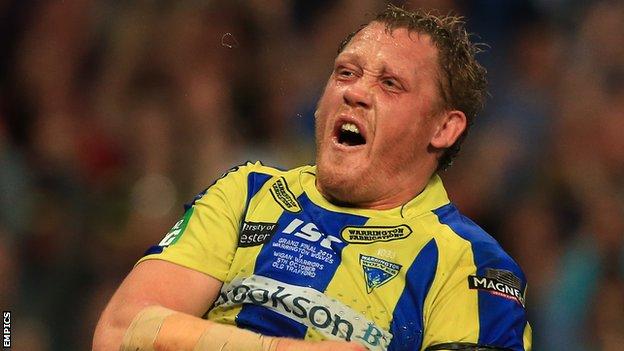 Ben Westwood will be available for England's World Cup opener against Australia after being given a one-match ban for a Grade B punching offence.

The Warrington second-row forward during Saturday's

The 32-year-old clashed with Green in the first two minutes of the match.

Westwood, who has also been fined £300, will miss England's warm-up game against Italy at Salford on 19 October.

The game against Italy takes place seven days before their opening group match against Australia in Cardiff.

Westwood, one of two Warrington players to be named in for the competition, will also be free to play in England's other group fixtures against Ireland on 2 November and Fiji a week later.

The incident with Green was put 'on report' by Grand Final referee Richard Silverwood, who did not spot it at the time.

Westwood scored a try later in the first half to put the Wolves 16-2 ahead, but Wigan fought back, winning 30-16 to claim the league and cup double, and deny their opponents a first league title since 1955.