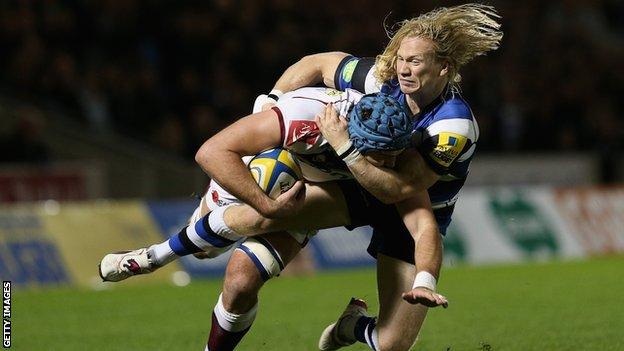 Bath and England Saxons winger Tom Biggs is to switch codes to join Super League side Hull FC at the end of the Premiership season.

"He was keen to have the opportunity to test himself in rugby league and play for us," said Hull boss Lee Radford.

"He is a local lad and an FC supporter, which you can see means a lot to him, and we're hoping we can nurture that enthusiasm to help him make a positive transition into our sport, which I am sure he will excel in."

Biggs, who has also represented England at Under-21 and Sevens levels, was Bath's top try-scorer in the 2011-12 season when he was also named the supporters' player of the year.

"It's been a desire of his for a while to have a crack at rugby league," Bath director of rugby Gary Gold told BBC Radio Bristol.

"He's been approached and it's an opportunity for him to play in his hometown.

"From our point of view, it's very sad to see him go but he's been an outstanding servant for Bath and it's great to see someone fulfil a life-long ambition."

Biggs becomes the second player, after Wigan back row Chris Tuson, to join the KC stadium side since Radford replaced Peter Gentle.

Radford took over from the Australian after the club's 76-18 defeat by Huddersfield in the Super League play-offs.