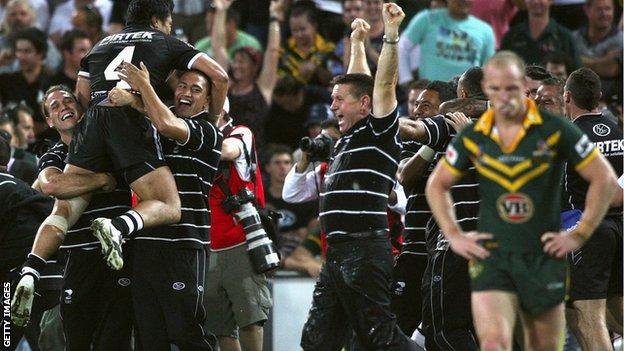 The Rugby League World Cup begins on 26 October, with 14 teams taking part in the tournament across the UK, Ireland and France.

Though the international game is traditionally dominated by Australia, New Zealand and England - where it is sometimes seen as a sport for the M62 corridor and little more - the World Cup is an opportunity for rugby league to reach beyond its core demographic.

From defying fascism to Fijians in Rochdale, expensive players to cheap tickets, BBC Sport gives you 10 reasons to take notice. 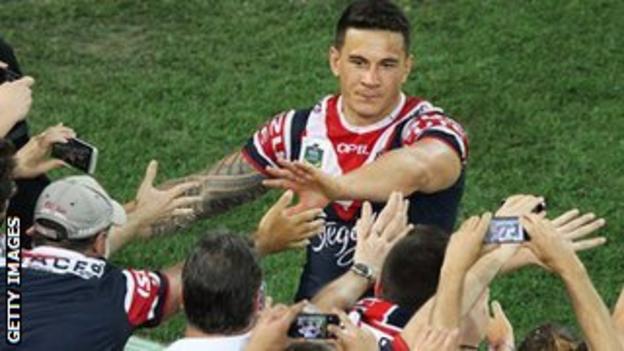 A headline-grabber on and off the pitch, Williams helped Sydney Roosters win the National Rugby League (NRL) title in his first season back in league after completing a five-year ban for walking out on Canterbury Bulldogs.

In his time away, the 28-year-old played union in France, Japan and his native New Zealand, as well as helping the All Blacks win the World Cup in 2011.

A return to union looks on the cards and seemed certain when he made himself unavailable for the tournament because of "other commitments", only for a change of heart 24 hours later and the subsequent confirmation that he will stay in league for a year at least.

Now, the man who is also New Zealand's heavyweight boxing champion (six wins from six fights) has the chance to fill the only gap on his CV, having missed out when the Kiwis triumphed in 2008.

Little-known outside of rugby league circles in the UK, Sam Burgess and his twin brothers George and Tom are celebrities in Australia, especially league-loving Sydney.

All three - along with a fourth Burgess brother, Luke - play for NRL side South Sydney Rabbitohs, Sam having been persuaded to move down under in 2009 by Souths owner Russell Crowe.

Crowe's treatment of Sam - before his Souths debut, Sam was presented with a Rabbitohs membership card for his late father Mark - led to the other three Burgess boys following and, earlier this year, they became the first quartet of brothers since 1910 to play for an Australian top-flight side in the same game.

With mum Julie also having moved to Sydney, the only disappointment for the Burgess family came when Luke missed out on a place in the England squad for the World Cup.

On top of all that, Sam has developed something of a rivalry with Sonny Bill Williams. Just after Williams took to the field for his league return, Burgess powered through Williams's attempted tackle, a steamrollering that has since been watched more than 300,000 times on YouTube. Will the two lock horns once more during the World Cup?

3. Watch the world's most expensive player

The Rugby League World Cup will be something of a farewell tour - for now, at least - for England full-back Sam Tomkins, who is joining NRL side New Zealand Warriors.

A world-record fee was paid to prise Tomkins away from Wigan, a sum in excess of the £450,000 paid by the Super League champions for Bradford's Stuart Fielden in 2006.

Intelligent, twinkle-toed and blessed with a touch of genius, Tomkins - the 2012 Super League Man of Steel - is England's all-time leading try-scorer.

Wigan have the first option on Tomkins should he decide to leave his new side, but with the possibility of the 24-year-old following brother Joel into union in the future, opportunities to see him play league in England are now at a premium.

4. You can afford it - especially with one ticket for two semis

With 28 games scheduled for 21 venues across England, Wales, Ireland and France, the Rugby League World Cup is nothing if not accessible.

While most of the stadiums used are around rugby league's traditional M62 heartland, the tournament also finds its way to union strongholds Neath, Bristol, Limerick and Cardiff, where the Millennium Stadium hosts the opening double-header when England face Australia and Wales take on Italy.

Prices are reasonable too, with 55% of tickets costing £20 or less and six grounds offering buy one, get one half-price deals.

But the best deal may be reserved for the semi-finals at Wembley, with both games played on 23 November and tickets starting at £20.

5. You'll see a trophy with a story

Pickles the dog earned a place in football history for discovering the Jules Rimet Trophy a week after it was stolen in March 1966 - but that story pales in comparison to the mystery surrounding the Rugby League World Cup trophy.

Commissioned for the inaugural tournament in France in 1954 at a cost of eight million Francs, the trophy was used until 1970, when the holders, Australia, put it on display in the Midland Hotel in Bradford.

Stolen six days before the final, it would not be seen again for 20 years.

In 1990, it was found on a rubbish dump in the city by Stephen Uttley, who eventually identified it with the help of a local newspaper.

When the trophy was returned to Rugby Football League headquarters in Leeds, an official said: "It is like the return of the Holy Grail. No-one knows what its value is, but in rugby league terms it is priceless."

6. It will be a festival of flavours - check out the Fijians in Rochdale

Fiji's game with Ireland at Rochdale's Spotland on 28 October may seem to have little significance aside from the fact it is both sides's opening game in Group A, but it may provide the most raucous atmosphere of the entire tournament.

Thanks to Joe Levula and Orisi Dawai, recruited by Rochdale Hornets in 1961, Rochdale has the UK's biggest Fijian population outside of London.

The affection shown to Levula and Dawai by Hornets fans was reciprocated, with Rochdale becoming imprinted on the minds of Fijians 10,000 miles away.

Fijians recruited to the British Army would travel to Rochdale, and the resulting community would eventually boost the Greater Manchester town's bid to host the tournament.

Rochdale will go even more Fijian for the Ireland game - special menus will be served in pubs, a Fiji Celebration Day will be held and hotels are sold out. The Irish should expect a partisan crowd.

7. It's the toughest sport in the world

Describing rugby league as the toughest sport in the world is a big claim, but there is science to back it up.

International rugby league players lose more playing time through injury than any other sport - 220 hours per 1,000 compared to 112 in American Football, 80 in ice hockey, 40 in football and 10 in cricket.

In a tackle, a rugby league player feels a force of over 10G, the same as a car crash.

If that doesn't convince you, consider some of the injuries suffered at the top level.

Leeds Rhinos full-back Ben Jones-Bishop once played 25 minutes against Wigan with a cracked skull, Great Britain's Paul Deacon fractured the roof of his mouth in a 2005 international against New Zealand and Warrington Wolves prop Paul Wood played on with a ruptured testicle, subsequently having it removed.

These boys are hard as nails.

8. Rugby league is the sport that defied fascism

In the run-up to World War II, rugby league was on an unstoppable rise in France - 225 clubs had been established in five years.

Seen as modern, innovative and linked to the pre-war left-wing government, it was banned by the Vichy regime - the puppets of Nazi Germany - after some lobbying from French rugby union, itself in decline.

The French had been pushing for a World Cup since 1935 and the dream was realised by Paul Barriere, a former union player who met league leaders when part of the French resistance.

Barriere worked to restore league in France following the war and, in 1951, proposed a World Cup, with the idea being adopted at a meeting in Blackpool in 1953.

The inaugural tournament was held in France in 1954, with the hosts narrowly beaten by Great Britain in the final. After hosting once more in 1972 and sharing duties with the UK in 2000, France again welcomes two games in the 2013 tournament.

9. The Aussies have a score to settle...

For 25 years, the Rugby League World Cup was a showcase of Australia's dominance. Six consecutive titles gave them nine out of 12 overall.

But that run came to a halt in the 2008 final with a 34-20 defeat by New Zealand in the Aussies's Brisbane backyard.

Now, the Kangaroos travel north to regain what they see as their property, spearheaded by the trio of Cameron Smith, Johnathan Thurston and Billy Slater.

Named in the top four players in the NRL by the Sydney Morning Herald, each man has also won the Golden Boot Award - given to the player voted the best in the world - in the past six years.

Smith, the captain, is a formidable presence at hooker, Slater has scored more tries than any other full-back in NRL history and creative half-back Thurston was the leading points scorer five years ago.

While the Rugby League World Cup has been an almost exclusive preserve of Australia success, their 2008 failure was proof that the tournament is not a closed shop.

New Zealand, boosted by the inclusion of Williams, travel with hope of defending their title, while co-hosts England, perhaps with the benefit of a post-Olympic bounce, are genuine contenders, despite the shock warm-up defeat by Italy.

It would be a surprise if the world's leading trio do not fill three of the four semi-final spots, with the last slot up for grabs to the rest of a field that could use unfancied Fiji's run to the last four in 2008 as inspiration.

The unorthodox format is an attempt to keep one-sided contests to a minimum, a theory that was largely successful five years ago - the majority of lower-ranked nations will not have to meet the big boys until the knockout stage.