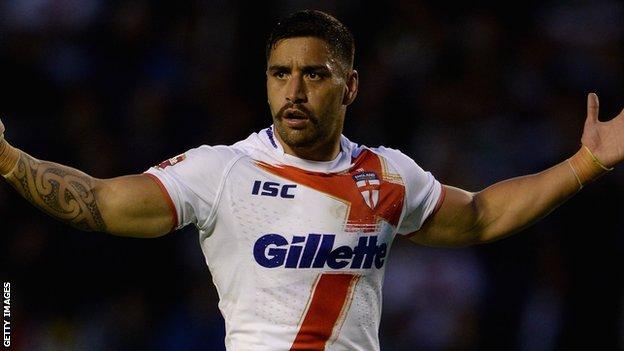 England's New Zealand-born Rangi Chase says he has found some English heritage which he hopes will end the debate over his controversial selection.

The 2011 Man of Steel caused a stir when he switched allegiance two years ago on residency grounds.

In the previous 12 months he played against England both for New Zealand Maori and the Exiles.

I'm passionate about where I come from and my ancestors

"One of my aunties has given me my family tree and it actually comes from England," said the half-back, 27.

"So, in a way, I've got that English blood in me. It might only be a little bit but it's in there and it's a big honour."

The former Castleford stand-off, who has signed for Salford, is currently training with Steve McNamara's squad in South Africa, ahead of the World Cup, hosted by England and Wales, which starts on Saturday, 26 October.

Although Chase hopes his discovery will finally win over the sceptics, he accepts he may never be able to please everyone.

"I've got my own personal reasons why I play for England," he added, following a week where Arsenal's Jack Wilshere launched a debate about sporting nationality by saying only English players should play for the England football team.

"Even before then, it was a big honour but it makes it a bit more special to know that I'm linked, I'm tied, I've got a bit of English blood in me. It means a lot to me. I'm passionate about where I come from and my ancestors.

"There is always going to be doubt and people are entitled to their own opinions but it makes it extra special because the name Chase is an English name.

"I believe everything happens for a reason. I believe I should be here and I'm grateful for that."