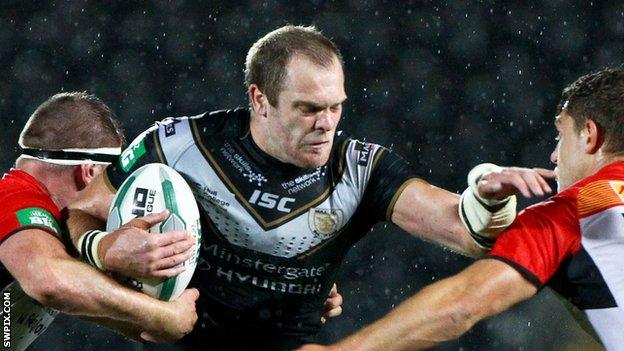 Hull FC forward Richard Whiting has agreed a two-year contract extension which will keep him tied to the KC Stadium club until 2016.

The 28-year-old will celebrate his testimonial year with the Black and Whites next season having joined from Featherstone in 2004.

Whiting has scored 71 tries in 224 appearances for Hull and played in every position for the club.

"This is my club, it's my home and I'm proud to represent Hull FC," he said.

During his time at Hull, Whiting has been capped three times by England, was named Super League's Young Player of the Year in 2005 and lifted the Challenge Cup in the same year.

However, he has been a the losing finalist in both the Grand Final and the Challenge Cup, the latter coming in August's 16-0 defeat by Wigan at Wembley.

"It's a dream come true to earn a testimonial with the club, as it was to finally walk out at Wembley," added Whiting.

"Our aim now is to get back there and win and finally show we can become a consistent force in Super League. I can't wait to play my part in that again next season."