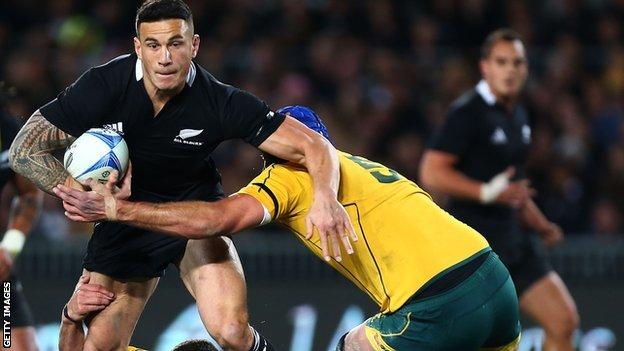 The 28-year-old recently turned down a three-year deal from New Zealand Rugby Union in favour of another year with rugby league side Sydney Roosters.

"I told the Roosters this is probably my last year," he told Fairfax Media.

"My intentions are to try to go back after next year and force my way into the All Blacks squad."

Williams, who is also New Zealand's heavyweight boxing champion, won the National Rugby League (NRL) with the Roosters last season and says the chance to help them become the first side since Brisbane in 1993 to successfully defend the title persuaded him to delay his departure from the 13-man code.

"A major factor in my desire to play next year was to try to go back to back, because it hasn't been done for so long," he added.

"I know it will be hard for me to force my way back into the New Zealand rugby [union] set-up, but [another season in NRL] was just something I felt was right and I just went with my heart in the end.

"I decided that I wanted to stay with the boys because it is tough leaving when you are a part of the start of a successful thing.''

Although New Zealand Rugby general manager Neil Sorensen had described Williams' decision to turn down their three-year offer as "disappointing", All Blacks coach Steve Hansen admitted the centre would be "very hard to leave out" of his side's world title defence in England in September 2015.

Williams may have to displace either Ma'a Nonu or Conrad Smith for a starting berth however. The centres started a world-record 51st Test together in this month's Rugby Championship decider against South Africa.

"He wants to play in the World Cup so that means he has to come back and play Super 15 in 2015 and he'll be like everyone else in that competition," Hansen told RadioLive.

"Everyone will be eligible to be selected for the All Blacks if they play well enough and, if he's in the form we know he can produce, he'll be very hard to leave out."

Williams was lured to union in 2008 by French club side Toulon, before returning to his native New Zealand in 2010 to play with Super 15 side the Crusaders.

He made his All Blacks debut in the 26-16 win over England in November of that year and has won another 18 caps including an appearance as a replacement in the World Cup final win over France in 2011.

A stint in Japanese club rugby preceded his return to league for the 2013 NRL season with the Roosters. This month he was a late addition to the Kiwi squad for their Rugby League World Cup defence in England and Wales, having initially said he was unavailable.