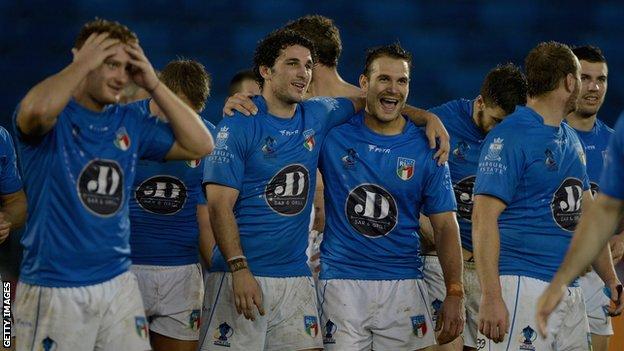 England suffered a shock 15-14 defeat by Italy only one week before the start of the Rugby League World Cup.

Josh Mantellato kicked a drop-goal 90 seconds from time to give Italy - at 13 the second-lowest ranked team in the World Cup - victory in Salford.

England, ranked third in the world, trailed 12-4 at one stage in the first half before two Sam Tomkins tries put the home side ahead.

But a Ray Nasso penalty and Mantellato's drop settled it.

"I'm really disappointed," said England coach Steve McNamara. "We've certainly not played anywhere near what we are capable of. That's quite clear to see."

"I just think our mentality was really wrong for this game. We were probably guilty of looking towards next week and we took our eye off this game. I don't think we were fully focused.

"I'm glad it's happened this week in a way rather than next week. I'm sure we will be a whole lot better for it next week.

Italy, coached by Salford-born and raised Napolitano, deserved their victory as England failed to impress on a rain-swept afternoon.

The only bright spot for England against Italy was provided by full-back Tomkins, who scored twice in the first half before watching his team-mates slump to defeat from the sidelines.

Tomkins was taken off 16 minutes from the end as McNamara gave run-outs to 20 members of his World Cup squad.

England floundered in a first-half rainstorm, which was accompanied by thunder and lightning, and were left to rue a series of early defensive lapses.

McNamara would have been concerned at the way his defenders fell off the tackle to allow St Helens prop Anthony Laffranchi a soft early try and the ease with which hooker Dean Parata burrowed his way from dummy half for the visitors' second.

"They are the worst tries you can concede," McNamara said. "They were soft tries and to concede them in that manner was not acceptable for an England team."

In between those two scores, centre Carl Ablett notched England's first try in the 19th minute, touching down at the corner, despite juggling with the pass from Liam Farrell, after winger Ryan Hall had collected Kevin Sinfield's cross-field kick.

As the storm clouds parted, Tomkins provided a spark for the hosts.

He took James Roby's superb pass to score his first try and then got on the end of Gareth Widdop's lofted kick for his second.

But the hosts missed a scoring chance when Hall failed to take Gareth Hock's pass 10 metres away from the Italian line.

And the Azzurri took the chance to draw level in the 69th minute with a penalty from in front of the posts by substitute Nasso.

Then, when Josh Charnley knocked on inside his own 20 metres, the Italians seized their chance and Mantellato was accurate with a 30-metre drop goal.

Earlier, England Knights survived the scare of conceding an early try to beat Samoa 52-16, with Jack Hughes scoring a hat-trick.

Elsewhere, Scotland were beaten 20-38 in a warm-up friendly against Papua New Guinea in Featherstone.

Steve McCormack's side face Tonga in their World Cup opener in Workington on 29 October.

The United States caused a shock by beating France 22-18 in Toulouse on Friday evening.