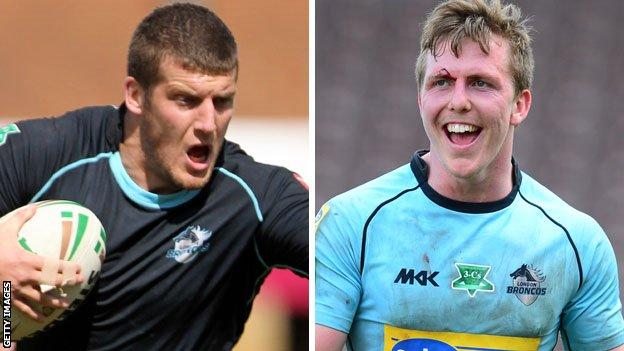 Forward Clubb, 26, arrives on a four-year deal for an undisclosed fee as he still had a year left at the Broncos.

Sarginson, 20, has signed a two-year contract with the half-back having an option for a further season.

It takes Wigan's signings up to five for next year, Sam Hopkins,Eddy Pettybourne and Matt Bowen having already agreed moves to the DW Stadium.

"I am looking forward to working with both of them, they are great acquisitions to our squad," said head coach Shaun Wane.

"Dan is a young player with lots of potential. He has been playing consistently well in the Broncos team and we know he has the attributes to settle quickly into the Wigan way.

"Tony, meanwhile, is everything I want in a forward, powerful and dynamic. He is hungry for success and possesses great leadership qualities which I am keen to tap in to."

Clubb has made over 150 appearances at the Stoop since his debut in 2006 and has represented England four times, although his last cap came in 2010.

Australian-born Sarginson is part of the England Knights squad and has been a regular in the Broncos side since his debut last season.