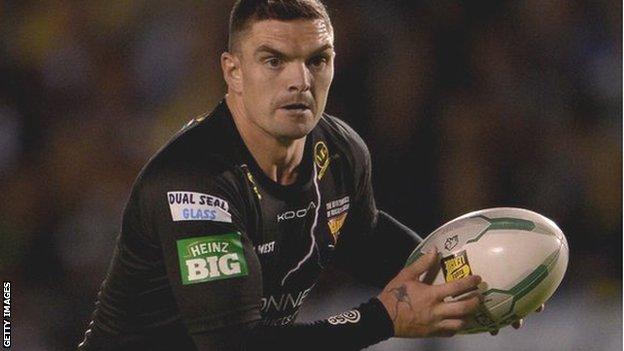 Scotland coach Steve McCormack insists there are no concerns over captain Danny Brough's fitness after a 38-20 friendly defeat by Papua New Guinea.

Brough played only 30 minutes of the warm-up game ahead of the World Cup.

"Everyone came through fine," McCormack said, 10 days before his side's opener against Tonga.

"Danny had a little twinge in his shoulder yesterday and I wasn't going to pick him, but we decided to have a little go with it."

McCormack said it was always his plan to restrict the playing time given to the Huddersfield half-back in Featherstone.

Despite Scotland's defeat, McCormack had few complaints with what he saw from his side.

"We want to win every game, but realistically you look at the squads and their preparation time," he said. "That will stand us in good stead.

"Early on, we showed some good touches. Then I made a few changes in the halves and at hooker and everybody has come through okay.

"It gives us something of a benchmark for the Tonga game."

If Scotland pick their best squad, they can take on any team they play

Kamuls coach Adrian Lam, whose side open their own campaign against France in Hull, thought the Scots looked in good shape despite his team's victory.

"I know Brough came off early, but every team in these friendlies has an agenda," he said. "Ours was to play as many people as we can and make sure we have the right players on the bench.

"If they pick their best squad, they can take on any team they play.

"We are pretty happy. When we first spoke about this game, we weren't sure because of the injury factor, but in hindsight it was the best thing we could have done.

"We needed this game. We don't know what will come next week. We have a young squad but have experience players in key positions, which gives us hope and, if we can keep improving the way we are, there are good times ahead."

Workington's Brett Carter touched down for the Scots early on, but Enoch Maki's reply and David Mead's conversion put the Kumuls ahead.

Ben Hellewell put Scotland in front on his home ground, with Brough on target with the goal, but Nene McDonald replied and Mead converted.

With Brough withdrawn, the Kumuls took more control and Wellington Albert was next to touch down.

Richard Kambo extended the lead after the break, with Mead again slotting over the kick before grabbing a try of his own.

Bradford's Danny Addy brought Scotland back in it and converted his own try and new Wigan recruit Alex Hurst raced in at the corner to reduce the deficit further.

However, Roger Laka killed things off with 10 minutes left, before a length-of-the-field McDonald intercept gave the scoreline a more credible look.