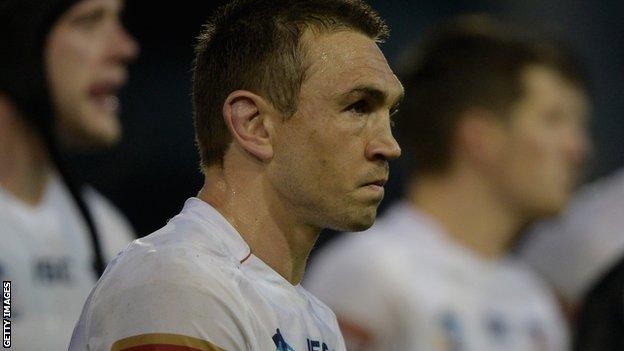 Captain Kevin Sinfield says England must forget their defeat by Italy or risk being humiliated by Australia in the opening match of the World Cup.

Italy, the second-lowest ranked team at the World Cup, beat England 15-14 in their final warm-up match.

Australia are England's first World Cup opponents on Saturday in a group which also contains Fiji and Ireland.

"If we're still thinking about Italy, Australia will wipe the floor with us," Sinfield, 33, told BBC Sport.

England coach Steve McNamara criticised his players for a lack of focus after their defeat in Salford on Saturday.

Sinfield has since watched videos to assess what went wrong, but insists now is not the time for over-analysing England's first defeat in five matches.

"Although you have to be disappointed and embarrassed by the performance, you can't dwell on it because we have the biggest week of our careers in front of us and a huge opportunity," added Leeds captain Sinfield.

"Hopefully it will be the kick up the backside we all need."

Despite losing to New Zealand in the 2008 final, Australia have won the Rugby League World Cup nine times, more than any other country.

Tim Sheens's side also go into the tournament in a fine run of form.

"We have to believe in our own players and structures and perform to our very, very maximum. Every player has to have a nine out of 10, or a 10 out of 10, game. We can't afford anything less. They are too good a team."

Sam Tomkins said he would swap his Wigan silverware for a World Cup. Would you swap all your Leeds Rhinos trophies?

"Very much so. I'm really proud of everything we've done with Leeds and the memories we've got but to represent your country, there's no bigger honour and I think the success for our country and the legacy we could leave would be huge for our sport so yes, I certainly would."

What are the magic words you mutter just before taking a conversion kick?

"I talk about relaxing and following through, keeping my head down in particular. But sometimes it changes depending on what I've worked on that week. There might have been something during the week I've not done as well as I'd like, so that particular coaching point I'd use with me in the game.

"I try and take the pressure out of it as much as I can. As I see it, I've got two roles. I'm the rugby player and also the kicker as well so when it comes to the kicking I try and switch off from every part of the game and focus on that one skill. Within that, I try and lock out the pressure and I try to imagine myself on the training ground, or even sometimes when I used to go practising as a 10-year-old kid, and focus on why I do it - because I enjoy it."

As captain, what's the main message you are looking to drive home this week?

"I suppose there will be a few, especially on the back of the Italy result. To keep believing. When you have a performance like we did, it's really easy to start doubting where we are. We've had all the aspirations and fantastic preparation and to get a shock like that is quite difficult to turn around in a couple of days but we have to, we can't dwell on it, we have to stay strong together and really believe in what we're doing. If we do that, I think we can come up with a great performance at the weekend and turn it around pretty quickly."

What is the last thing you will say to your players before they walk out to face Australia on Saturday?

"Let's go and enjoy it. I think at that stage we will have done a lot of practise, looked at a lot of footage and worked really hard trying to fix things up from Italy. But we're coming up against the best team in the world and I think we're really, really fortunate we get the chance to represent our country on a huge stage at the opening ceremony of the World Cup. We were all seven, eight, nine-year-old kids at one stage, wanting to be in that exact dressing room ready to go out and face Australia. So I think we will play our best stuff if we go out and enjoy it. That will certainly be my message."

As captain, players come to you for advice and inspiration. Who do you turn to for guidance and who inspires you?

"There would be a number of people. My head coach at Leeds Rhinos, Brian McDermott, has some fantastic ideas and beliefs, as does England head coach Steve McNamara. Our old England captain and my Leeds team-mate Jamie Peacock is someone who has been in touch over the weekend and Jamie Jones-Buchanan, another team-mate, has also been in touch. They both have very positive messages and, while a lot of people out there are looking at doom and gloom after the Italy result, they are very quick to point out that the World Cup hasn't started yet and how quickly you can turn a poor result into a fantastic one. We've got that opportunity this week."

Does your defeat by Italy and France's loss to the US tell you this is a World Cup that may throw up a few surprises?

"Before our result at the weekend, and the French result, I thought there'd be some surprises anyway. I didn't realise they'd come so quickly. Obviously we were disappointed and in many ways embarrassed by our performance as a group. We have to take that on the chin and be stronger from it. I'm sure there will be similar surprises and some teams will end up with egg on their face, but that's part of sport and why it's so enthralling for people."

What represents a successful World Cup for England?

"Going into the Italy game, it would have been far easier for me to say we've got to do better than the last two World Cups, which we made the semis in. I think to make the final would be fantastic and then it becomes a one-off game. If we performed well enough, we could go on and win it, but it's a long way off after the Italy game. What I can promise from here is the team will give nothing short of 100% in every game and we will strive to be the best we possibly can."