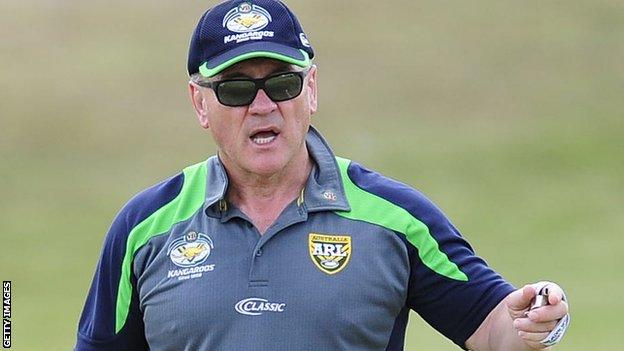 Australia coach Tim Sheens believes England could be galvanised in the Rugby League World Cup by their shock friendly defeat by Italy.

Steve McNamara's side suffered a 15-14 loss to the Azzurri in their final warm-up match for Saturday's tournament opener against Australia.

"I know Steve will be disappointed but, to me, a side that's embarrassed is a dangerous side," said Sheens, 62.

McNamara hopes the surprising result will provide a "reality check".

"The performance wasn't great, but one that hopefully will put us in a better position to win it," the 42-year-old said.

"It reminds us we have to be at our best for the tournament."

Before the defeat in Salford, England spent two weeks training at altitude in South Africa.

A camp in Loughborough will become the team's home before the match with Australia at Cardiff's Millennium Stadium.

McNamara is pleased with the preparations of his 20-man squad and hopes the defeat against Italy can prove beneficial as they plan for a group that also contains Ireland and Fiji.

"It reaffirmed we need to concentrate and be on the mark for every single game," added the former Bradford coach.

"We're not at that stage as a team where we can not quite be at our best and still win games.

"Teams very rarely win World Cups and are world class from the first game through to the last game. There are bumps, bruises and obstacles along the way. We created one ourselves on Monday and it's our job to find a way past them this week."

McNamara hopes to name his team early this week and expects Wigan loose forward Sean O'Loughlin to figure after he was rested for the Italy defeat.

Warrington Wolves second rower Ben Westwood could also return from suspension as England attempt to beat an Australian side who have won six of the past seven World Cups.

Australia's 24-man squad arrived in Manchester nearly a week ago, and they are one of only three teams not to play a warm-up match.

Prior to their move to a new training base in Cardiff on Tuesday, Sheens declared he was happy with his side's preparations.

"So far, so good," he said. "We came over early to make sure we got our feet on the ground and to make sure everybody is in good shape physically.

"We've had a couple of nights where we've got to know each other, but it's the business end this week and we picked it up on Saturday and again today.

"The boys are working fairly hard and they've pretty much come around to their sleep patterns and are back to normal."