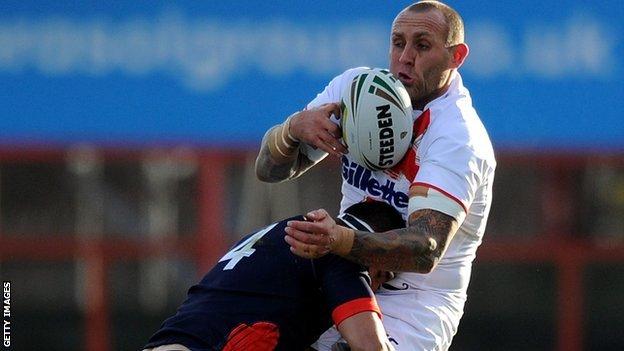 The Salford forward has been replaced by Huddersfield's Brett Ferres.

"This is as a result of serious breaches of team discipline that have fallen below the strict code of conduct as agreed by team management."

Salford chairman Dr Marwan Koukash has pledged to stand by his player and said the "full facts" would emerge.

"Until then, do not make your own assumptions of what happened," Koukash tweeted.

He added: "I once went out with lads for a few drinks, overslept in the morning, missed work, got fined but not sacked from my job."

Koukash said Hock, 30, would speak about the matter on Wednesday, adding: "The decision has been made and (we) have to respect it."

The Rugby Football League banned Hock for two years in 2009 after he tested positive for a prohibited substance while playing for Wigan.

He was found to have Benzoylecgonine, a metabolite of cocaine, in his system after he was tested following Wigan's home match against Salford.

"We don't know the exact details of what these breaches are but if you were going to pick a player who might breach discipline, Gareth Hock is the one. He does have form. In terms of him as an England player, he was always likely to be a risk - he's an X-factor player who can turn a game, but equally does give penalties away and lacks discipline. Put this alongside the shock defeat against Italy - you hope it doesn't lead to a meltdown and England recover their poise."

Hock, who spent last season on loan from Wigan at Widnes Vikings, was for using abusive language towards a match official and received a four-match ban in May for making deliberate contact with referee George Stokes in his side's 36-0 win over Workington.

He also received a five-match ban for committing a similar offence while playing for Wigan in 2008.

In September, Salford announced the signing of Hock on a four-year deal from the start of the 2014 Super League season.

Former Bradford, Wakefield and Castleford second rower Ferres, 27, was not in McNamara's elite training squad at the start of the year but forced his way into contention after an impressive first full season with Huddersfield.

McNamara did not name Ferres in his 24-strong World Cup squad but he impressed the coach when playing for England Knights in their 52-16 win over Samoa at Salford last Saturday and remained on stand-by with the squad in Loughborough.