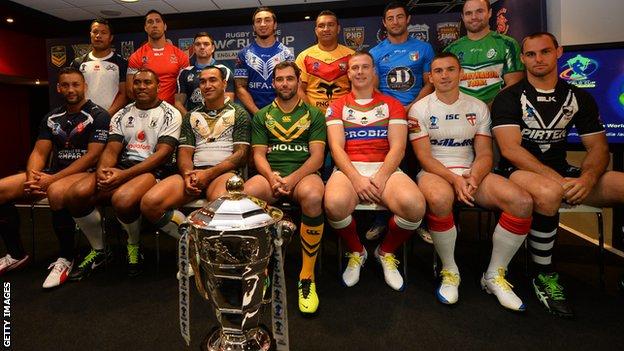 England and Australia will kick off the 14th World Cup at the Millennium Stadium on Saturday in the first game of a double-header in Cardiff.

The Kangaroos suffered a shock defeat by New Zealand in 2008, and the Kiwis are one of 14 teams in the competition, alongside debutants Italy and the USA.

There will be 28 matches in England, Wales, Ireland and France with the final at Old Trafford on 30 November.

Wales take on Italy in Saturday's second game in Cardiff.

Co-hosts Wales are in Group C, while Italy are in Group D, with the two groups of weaker nations playing each other to produce two quarter-finalists - a format designed to ensure every team in the competition has a chance of scoring tries and winning a game.

Three teams will also advance into the quarter-finals from each of groups A and B, containing the stronger nations.

The Azzurri - at 13th the second-lowest ranked team in the World Cup - stunned Steve McNamara's England men in a warm-up match, winning 15-14 in Salford.

But England will be boosted knowing they possess a pack containing the Burgess trio of Sam, George and Thomas from NRL side South Sydney Rabbitohs, as well as Grand Final winner Sam Tomkins at full-back.

St Helens hooker James Roby insists the side are ready for the clash against eight-time champions Australia.

"We know we need to perform and we know we need to improve a hell of a lot," said Roby. "They've been a similar team for the last few years. We've played against them a number of times so we know what to expect.

"The NRL lads are playing against them week in, week out so they'll have a few things that we might not know and that can only help us."

Overwhelming favourites Australia, boast a team consisting of Johnathan Thurston, Cooper Cronk, Cameron Smith and Billy Slater who all play together for Queensland in the State of Origin.

"I know Steve will be disappointed but, to me, a side that's embarrassed is a dangerous side," said Sheens.

"I saw what I wanted to see, but, as far as the result is concerned, that's for England to worry about, not me. My concern is to make sure that we're on song for our first game."

New Zealand, in Group B with Papua New Guinea, France and Samoa, will be looking to emulate the success of five years ago when they picked up the trophy for the first time.

And they will buoyed by the late inclusion of dual-code international Sonny Bill Williams who won the NRL title with Sydney Roosters.

Williams is confident he can cope with the pressure of bidding to become the first player to win World Cups in both rugby league and rugby union.

"From the start of this season, there was a lot of pressure. I had everything to lose and the pressure was firmly on me," he said.

"I guess I kind of thrive on that. It gets the best out of me. I seem to be able to push that to one side and focus on all the little things."

Wales are making their third appearance in the tournament and coach Iestyn Harris expects his side to reach the quarter-finals.

"The crucial thing for us is to get out of the group," he said.

"We've got three difficult opponents. When you get through your group, then it's knockout football and that's where you want to be."

Scotland coach Steve McCormack hopes skipper Danny Brough of Huddersfield Giants can lead his side by example, with the Bravehearts set to face Tonga and Italy.

"You don't get the Man of Steel by not being a good player," said McCormack.

"We're not a team of superstars, but we're a team of really good players that work very hard together. Danny is at the head of that. He works exceptionally hard."

Ireland have been handed a tough group alongside England, Australia and Fiji, and coach Mark Aston said: "We haven't had the luxury of going to South Africa for a training camp but we're coming together.

"It's a case of blending individuals into a collective and the group are getting close."