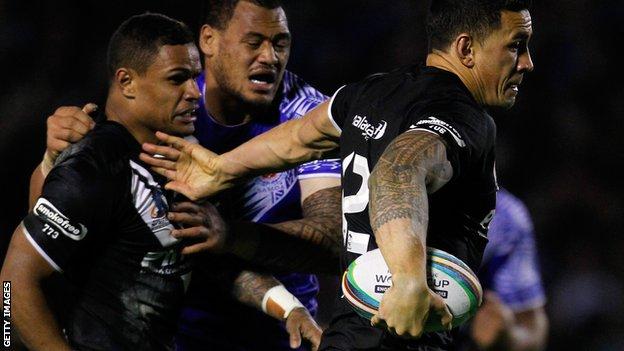 Holders New Zealand fought off a late Samoa comeback to begin the defence of their World Cup crown with a victory.

The Kiwis took control early on in the Group B match at Warrington, with captain Simon Mannering crossing for two of their four first-half tries.

Manu Vatuvei added two more tries after the interval but Samoa, from 32 points down, battled back in superb fashion.

They scored four times without reply in the second period but Vatuvei completed his hat-trick to settle late nerves.

New Zealand were the last of the three tournament favourites to make their World Cup bow, following Australia's narrow win over co-hosts England in Cardiff on Saturday.

At 36-4 up, Stephen Kearney's men looked like heading for a convincing victory, but the way in which they caved in to a powerful Samoan outfit in the final 30 minutes will be of concern ahead of their final two group games against France and Papua New Guinea, and even stronger challenges ahead.

Former Wigan half-back Thomas Leuluai was missing for the defending champions because of a groin injury, but there was a starting spot in the second row for Sonny Bill Williams, who is aiming to become the first player to win a World Cup in both codes of rugby and whose late inclusion in the final travelling party was one of the major stories in the build-up to the tournament.

Of the 17-man squad that shocked Australia in the 2008 final, there were only three survivors - skipper Mannering, winger Vatuvei and hooker Issac Luke.

Another of that victorious line-up from Brisbane five years ago, prop David Fa'alogo, was named in a Samoan team that did not include injured captain Harrison Hansen.

New Zealand were made to wait 11 minutes for their first score of the game but then raced into a 22-0 lead with four tries in quick succession.

The quartet of touchdowns came from full-back Josh Hoffman, two from loose forward Mannering and winger Roger Tuivasa-Sheck after gaps were exploited on the right touchline.

Samoa fought back and enjoyed a long spell of pressure before the interval, finally getting their rewards when half-back Ben Roberts jinked past two tackles to dive over.

Two Kiwi tries in the opening five minutes of the second period, courtesy of Vatuvei's towering take of a high kick and an expansive effort from Luke, looked to have killed off any hopes of an unlikely comeback.

Vatuvei went over again in the corner before the underdogs, roared on by a sell-out crowd at a blustery Halliwell Jones Stadium, demonstrated the expansive and powerful brand of rugby that has become their trademark to devastating effect.

Centre Joseph Leilua rounded off a flowing move, prop Penani Manumeasili touched down for an opportunist third try and, as New Zealand's defence struggled to cope with another barrage of pressure, the swing in momentum brought Samoa to life.

Tries from forward Suaia Matagi and winger Antonio Winterstein reduced the deficit to 12 points, while Williams's unfortunate slip over the dead-ball line with a match-clinching score at his mercy stunned a rattled New Zealand side still further.

But Samoa tired in the final 10 minutes and Vatuvei took advantage of the open space afforded to him on the left touchline to end Samoa's hopes of a heroic victory.