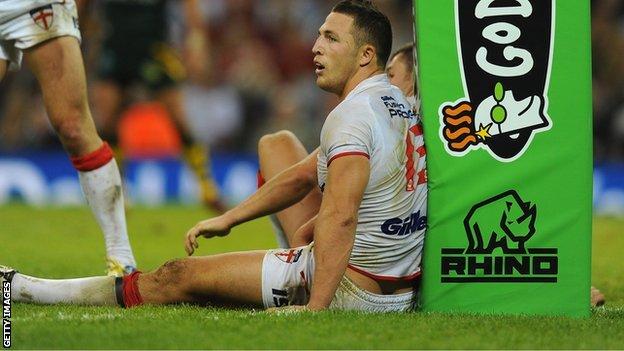 England front rower Sam Burgess has been banned for one game for a high tackle in his side's 28-20 World Cup defeat by Australia.

The 24-year-old was placed on report by referee Henry Perenara after he caught Sam Thaiday in the head with a swinging arm during the second-half.

England have accepted the charge and will not appeal.

It means Burgess will miss England's second game of the tournament, against Ireland in Huddersfield on Saturday.

Wins over Ireland and Fiji would see England progress through Group A, despite the defeat to Australia.

Before the match against Australia, England coach Steve McNamara refused to answer questions on the absence of Gareth Hock and James Graham from his squad for the tournament's opening match at the Millennium Stadium.

Canterbury Bulldogs prop Graham is likely to be a contender to replace Burgess, while Wigan loose forward Sean O'Loughlin could also take his place if he is fit after an Achilles injury.

Meanwhile, Papua New Guinea's Paul Aiton has also picked up a one-match suspension for a high tackle on Morgan Escare of France.