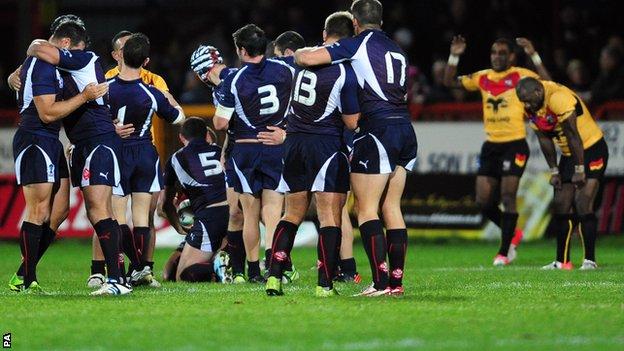 Papua New Guinea missed a late penalty as France held on to win an exciting opening game in Group B of the Rugby League World Cup.

Bosc's penalty and a William Barthau drop-goal restored France's lead but David Mead's late kick could have clinched victory for the underdogs.

"It was an enthralling game. Papua New Guinea tried so hard to get points on the board and it will be difficult for them to get out of Group B now. They have to beat the bigger sides. I feel sorry for David Mead and his confidence was rattled by the first two missed conversions. That was the game for Papua New Guinea but he couldn't kick it."

France will now be confident of reaching the quarter-finals, with three teams progressing from a group that also contains holders New Zealand and Samoa.

The French squad, ranked fourth in the world, is predominantly made up of Catalan Dragons players, with of 11 of the starting 13 coming from the Super League side, and it was Bosc who squirmed his way over the line from Eloi Pelissier's pass for the opening try, and the scorer added the conversion.

Papua New Guinea, the only country in the world that has rugby league as its national sport, were playing some expansive rugby in blustery conditions and grabbed their first try through McDonald after consultation with the video referee.

Salford's Theo Fages had a try ruled out for France because of double movement, as his side went in at the interval with a narrow 6-4 lead.

The Kumuls, ranked sixth in the world, went ahead immediately after half-time, forcing a French error before Abavu scored in the corner following a well-constructed move.

Managed by former Wigan half-back Adrian Lam, Papua New Guinea were on top in the second period but were unable to convert their pressure into points.

A penalty from Bosc allowed France to draw level with 20 minutes to go, and Barthau's one-pointer on 65 minutes edged Richard Agar's side ahead.

The Pacific nation could have won it with three minutes to go but Mead - who failed with all three kicks at goal - missed a penalty attempt from 25 metres out.

"I'm both proud and disappointed. If we kick the goal it's a great night, so now we have to pick ourselves back up off the ground. We couldn't convert our opportunities.

"David is devastated. He's a great young man and we spoke with him about how he's not to blame. He is a big part of our side. He's not a week in, week out goal-kicker and we don't have one. That's the problem.

"He's blaming himself but there are a couple of other things we could have done better.

"We're in a tough group but there is still an opportunity there and things may still swing our way."

"If I'm honest, I wouldn't have had many complaints had we lost. I thought we both played better into the wind and we actually played a good game tactically in the first half.

"We handled the conditions well and we worked really hard, but the way we controlled the game in the latter stages meant we had no chance to build any pressure."

"There are tears in the eyes of some of the officials because I forgot (as Wakefield coach on a full-time basis) that France haven't won too many Test matches lately.

"As a coach some of that was heart-attack stuff and to work so hard and think with a minute to go we're going to lose. The players are very pumped."