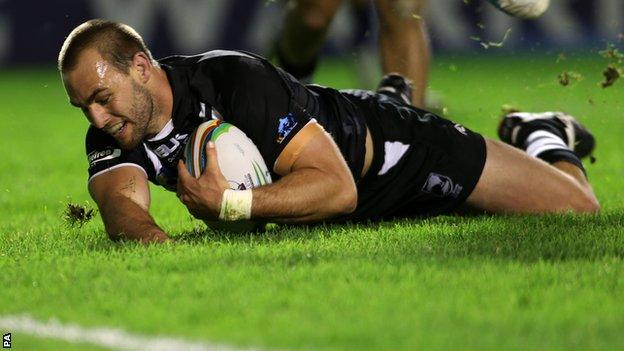 Captain Simon Mannering believes holders New Zealand can recover from a "rusty" opening display after beating Samoa 42-24 in their first group match of the 2013 World Cup.

They almost surrendered a 36-4 lead, conceding four unanswered tries in quick succession in the second half.

"There's the initial disappointment of the performance, but there's nothing to get deflated about," said Mannering.

"There's still a long way to go in the tournament."

The loose forward, who scored two of New Zealand's eight tries in Warrington, continued: "Hopefully it's a shot in the arm.

"We were rusty for a long period, but we've got to improve each week and put ourselves in a position where we're hitting our straps at the right time."

The Kiwis led 22-4 at half-time and went further clear with three more scores in the first 10 minutes of the second period.

But New Zealand, who surprised Australia to win the tournament for the first time in 2008, had no answer to a powerful and expansive spell of Samoa pressure.

Matt Parish's side reduced the deficit to just 12 points before winger Manu Vatuvei completed his hat-trick to settle any late nerves.

Mannering, 27, added: "We definitely lost our way for a pretty long period of the game. I don't think we touched the ball for about six or seven sets.

"Everything they threw at us came off and everything we did didn't seem to work.

"Take nothing away from them. They played very well but we've got to be very disappointed with the way we defended. That's not a good enough performance for us to carry on in this tournament.

"It gives us a lot of things to work on."

"It was disappointing, but the Samoan side played with a lot of energy through that period," he said. "We dropped some balls and they just gained the momentum.

"There were some good parts of the game there for us. When we stuck to our structures, I thought we built some really good pressure on them and came up with some pretty good plays."

Victory was achieved by a New Zealand side which contained Sonny Bill Williams for the first time in more than five years.

The 28-year-old, who won the 2011 World Cup with the All Blacks during his hiatus in rugby union, almost marked his comeback with a second-half try.

But, at a time where the Kiwis were undoubtedly rattled by Samoa's spirited fightback, the second-rower inexplicably slipped over the dead-ball line under no pressure and failed to ground the ball.

"He might want to check his boots next time," said Kearney. "But that was probably a good indication of what was happening in that period of the game."