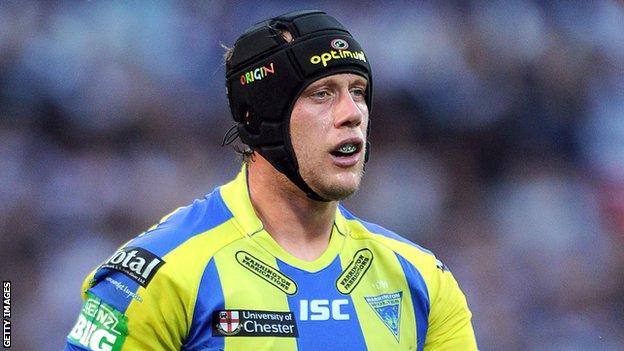 England prop Chris Hill has agreed a new "improved" contract at Warrington which will keep him with the Grand Final runners-up until 2018.

The 25-year-old, currently part of England's World Cup squad, joined the Wire in 2012 from Championship Leigh.

Last term he made 32 starts for Wolves, following on from a 2012 in which he was named in the Super League Dream Team and lifted the Challenge Cup.

"It's a great club to be a part of - fighting for trophies," Hill said.

"I'm glad to have secured my deal and to be playing for the Wolves for the next five years. It's down to the players I've played with and a great coach."

Hill has endured heartbreak at the end of both of his Warrington campaigns, losing in the Grand Final to both Leeds and Wigan, but he says this will spur him on for next season.

"The disappointment of how the last two years ended means we will be fighting once again next year to make it one step further in both competitions," he added.