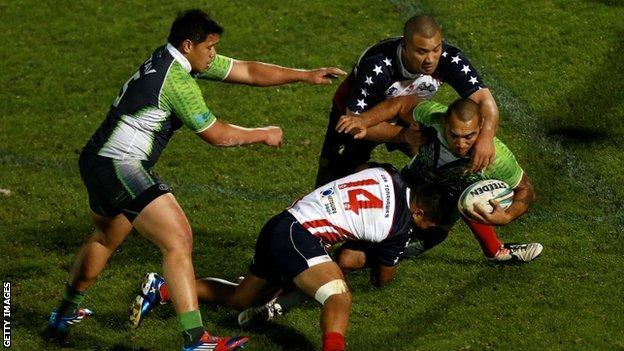 The USA created history by beating the Cook Islands for a debut victory in their first match at the Rugby League World Cup.

Former Castleford coach Terry Matterson's Tomahawks side ran in six tries at a wet and blustery Memorial Stadium in Bristol.

Mark Offerdahl and Craig Priestly went over in the final eight minutes of a close encounter to seal victory.

The Cook Islands looked to have struck first after three minutes when Tinirau Arona went over the line, but the video referee decided he was held up.

However, on the next tackle, Brad Takairangi crashed over and Jordan Rapana's kick made it 6-0.

The USA got themselves into the game with forwards Clint Newton and Wigan-bound Eddy Pettybourne causing problems - and they went over twice in the space of three minutes.

Priestly's 40/20 set up Bureta Faraimo, who held off the challenge of Keith Lulia to score before a high kick from Priestly and a delightful pass from Michael Garvey allowed Matthew Peterson to go in. But Joseph Paulo missed both conversions.

Paulo was successful with a penalty to edge the USA 10-6 before Drury Low went over to level the match with a try four minutes before the break which Rapana failed to convert.

The USA started the second half strongly and Paulo put the Cook Islands under pressure before going over - but Lulia Lulia hit back to level the match again at 14-14.

Once again the USA took the lead through Tuisegasega Samoa and Paulo edged the kick in off the post only for Dominique Peyroux's try and Rapana's conversion to give the Cook Islands hope of victory.

But it was the USA who finished the stronger with Offerdahl going over and Paulo's high kick causing all sorts of problems for the Cook Islands defence, allowing Priestly to pluck the ball out of the air and score.

Paulo converted the Priestly try and with the Cook Islands beaten Paulo added a late penalty to secure the win in front of a crowd of 7,247.

The USA will next face Wales on Sunday while the Cook Islands' next game will be against Tonga next Tuesday.