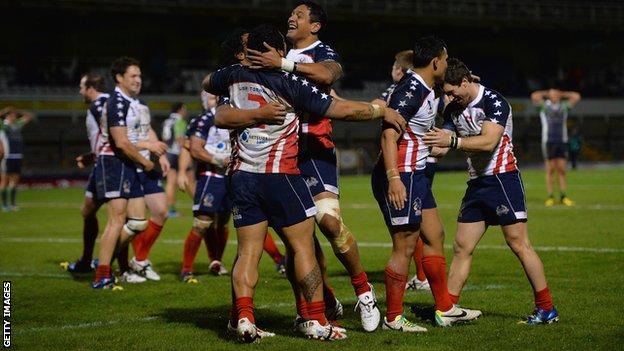 The USA's World Cup win over the Cook Islands in Bristol was one of the most uplifting and heartening nights I've had covering rugby league in years.

A vocal, passionate crowd largely unfamiliar with the sport, enjoyed a wet and windy moment of league history in a union stranglehold. It gave an often battered game another shot in the arm.

As excited as I have been about this competition, this fixture was the one that always worried me, both on and off the pitch. Would there be enough, or any appetite for the game from curious Bristolians? And would two teams without a single World Cup win between them be able to put on any kind of show for those who did brave the horrendous conditions to give it a go?

My confidence was not hugely lifted when I saw the USA's coach driver rushing into the dressing rooms to change into the Tom the Eagle mascot costume either. Yet it worked. All of it. 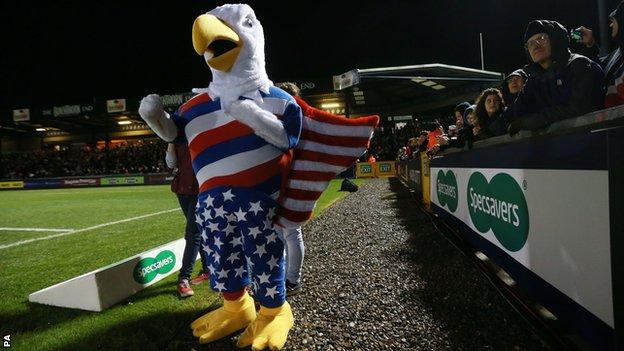 More than 7,000 fans watched a compelling contest and a moment of history as the 1,000-1 outsiders beat the tournament's smallest competing nation, and the locals loved it. Most supported the Cook Islands, "oohing" and "aahing" at every big hit, although the chant of "there's only one Cook Islands" did have to be corrected to 15.

David Fairleigh's team, who competed in 2000 but didn't win a game, had enjoyed 10 days in Bristol to prepare. "We have enjoyed our time here," he told me in the tunnel before kick-off. "The people have been great with us, and the interaction with schools and communities has been fantastic."

When the World Cup schedule was drawn up and venues announced, I understand this was the one single fixture that most concerned organisers in terms of sales and interest. Tickets were sold for £10 and it paid off.

The USA coach Terry Matterson - himself a very late appointment and late arrival ahead of the tournament, echoed Fairleigh's positivity. "The boys have been blown away by Bristol and its history," he told me. "I've never been here, the players had 50 hours in the air to come together before our warm-up game against France and now here we are."

The Tomahawks stunned the French to win that game, and now they'll fancy shocking a few more teams to reach the knock-out stages. Matterson admitted he was "pleasantly surprised" by that performance, but he doesn't do emotion.

The former Castleford coach once only noticed he'd lost a finger when he looked down and realised his wedding ring was missing after a training session. The ring was still attached to his finger, on top of a steel fence over which he had climbed to retrieve a lost ball.

Yet last night I saw real emotion in the Australian, who has been working as an assistant coach back home. Speaking before the game he told me he would only know how good his players were after the match. He had hardly seen this collection of NRL professionals, Aussie lower league players and self-funded Americans play together.

"Some of our guys have had to finance this trip themselves and put other jobs on hold and you can see what it means to them to play for their country," he said after the game, with a shell-shocked air of unexpected pride.

Players raced off the bench, draped in the stars and stripes on the full-time hooter to celebrate as though they had won the final. It was a moment of vindication for a team which had ignored claims of many domestic players to compose a squad of the best available talent, which caused controversy and severed friendships.

Moreover, this was a fantastic result for world rugby league.

This is the furthest US rugby league has come in 60 years of trying, and the biggest indication yet that the sport can work in the south west of England. Only a few years ago one of my old schoolmates was playing for the local league team, the Bristol Sonics, a team founded 11 years ago.

Andy is a lovely bloke, and one of my best mates, but he'll readily admit his sporting prowess was perhaps not hugely deserving of a place on the wing. Fast forward six years and the Sonics are a strong two-tiered club who have done some terrific work in spreading the league word through a traditionally union heartland.

To see Bristol take to rugby league was inspiring. To see full-time professionals competing for nothing other than a love of and debt to rugby league, proves romance is alive and well in sport too.