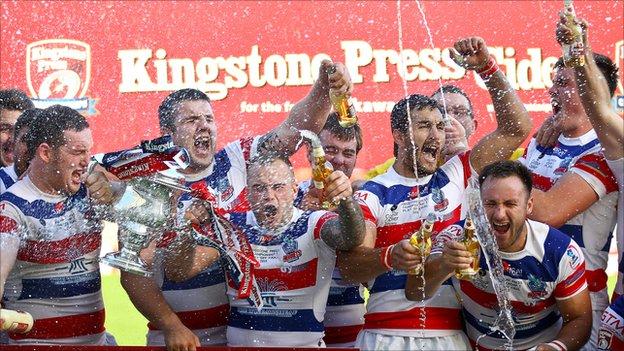 Chairman Ty Watson is confident Leicester Storm could compete in Championship One, with a view to eventually reaching Super League.

Watson plans to apply to the Rugby Football League for a place in the bottom tier of the professional game starting from the 2015 season.

Storm, who play in the National Conference South, need to submit their application by the November deadline.

"I think we could compete at that level [Championship One]. It's technically one level above where we are.

Mansfield Marksman - named after the local brewery's brand of lager - were professional rugby league's Midlands representatives during the 1980s.

Playing at Field Mill, home of Mansfield Town, the club entered Division Two in 1984 and, despite making a bright start, lasted just five years before moving to Nottingham.

Life at Harvey Hadden in Bilborough was tough for the rebranded Nottingham City and they were finally relegated in 1993.

It brought to an end a near decade of professional rugby league in the Midlands.

"It's my life ambition to get this team in the Super League.

"This is possible. It's not going to be an easy thing, or a quick thing, but the talent exists in this city and I won't rest until it happens."

The RFL has been open to expansion for clubs throughout the country, having awarded places in the bottom tier to Hemel Stags, Oxford, Gloucestershire All Golds and Coventry Bears - who will take their places in 2014.

Northampton were expected to take part this season but eventually withdrew an application amid fears the club would not compete.

Non-heartland clubs such as Gateshead Thunder and London Skolars, plus the Welsh duo of South Wales Scorpions and Crusaders, also compete at that level, making Championship One one of the sport's most geographically diverse leagues.

Like Super League, clubs must prove their suitability to step up from the amateur ranks, and Watson is confident of delivering an application that stands up to RFL criteria.

"It's been part of our five-year development plan to be a professional outfit by 2015," he said.

"We have ticked every box along the way, reached every checkmark with the RFL and timing is right to do that.

"Off the pitch we have worked on our business plan and bringing our commercial partners in line.

"There is also a small RFL grant that comes with the Championship application as well, and we're confident the business model makes sense and stacks up.

"We're having it externally audited at the moment to make sure we're not just being biased, and the two directors both run companies so we're confident that stacks up."