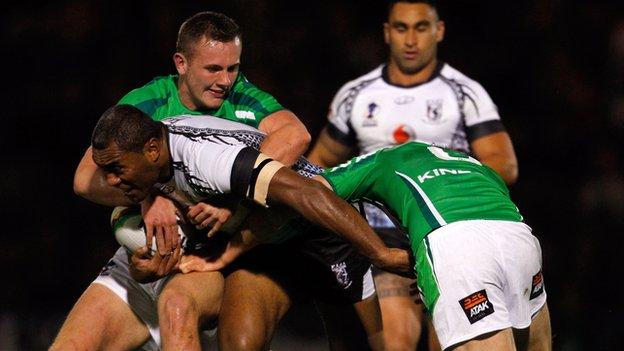 Rookie James Mendeika will deputise for Scott Grix at full-back for Ireland in Saturday's World Cup group A clash with England at Huddersfield.

The 21-year-old played at stand-off in the 32-14 defeat by Fiji on Monday but moved to full-back when Grix went off towards the end with a thigh injury.

The experienced Grix has failed to recover so misses out on playing for his country on his home ground.

Mendeika's only Super League experience came in 2013 with London Broncos.

Coach Mark Aston has turned to the Warrington youngster, who enjoyed a loan spell with the London outfit this year.

"It's disappointing that Scott is not quite ready because we wanted our best team out there but what it does do is offer an opportunity to James Mendeika and, with the energy and enthusiasm and the skills he's got, I'm sure he will fit in very well," said Aston.

Ireland are also without Widnes prop Eamon O'Carroll, who picked up a shoulder injury in the defeat by the Fijiians, but Aston expects to have former Huddersfield second rower Simon Finnigan back after he sat out the opening game with a hamstring problem.

Aston is set to switch Warrington second rower Ben Currie to stand-off in the forced re-shuffle and amend his tactics accordingly.

Salford stand-off Marc Sneyd would have been the obvious choice for the number six jersey but he was ruled ineligible after failing to complete the paperwork in time, leaving Aston with a 23-man squad to work with.

"We might go with a different tact within the game structure," Aston said.

"Ben has played there before - he's played for England against Australia at junior level at stand-off - so he's accustomed to that.

"He might be more of a running six than a ball-playing six but that's what we want. We want people who are going to hit the line hard against a very good team."

Utility back Josh Toole and forwards Luke Ambler and Danny Bridge are the other players added to the team that was swept aside by the aggressive Fijiians at Rochdale.

Ireland were one of only three teams not to play a warm-up match and Aston is confident they will improve in their remaining group games against England and Australia.

"We were a little bit rusty," he said. "We hadn't had a lot of time but I've got to say the commitment, the attitude and the togetherness was there. What we've got to be is a little more clinical.