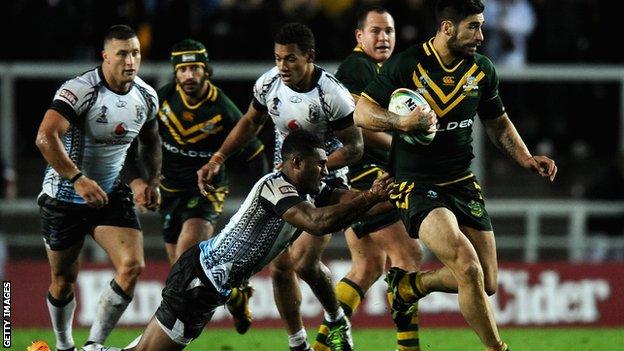 Australia proved too strong for Fiji at Langtree Park in St Helens to claim their second win out of two in Group A of the Rugby League World Cup.

The Kangaroos went behind to an Alipate Noilea penalty but then scored 34 unanswered points.

Josh Papalii, Darius Boyd and Michael Jennings scored in the opening half before Josh Morris, Daly Cherry-Evans and Luke Lewis crossed after the break.

Johnathan Thurston kicked four goals as his side secured a quarter-final spot.

There was bad news for the Kangaroos though as Lewis dislocated a shoulder and may miss the rest of the tournament.

After Australia had an early try disallowed, Noilea gave the Fijian supporters something to cheer in the wet conditions with a seventh-minute penalty to put his side ahead.

But it was not long before Papalii notched a debut try after finding himself in space in the middle of the park. Thurston added the extras.

Six minutes later a delightful offload from Greg Inglis, playing at full-back after lining up on the wing against England last Saturday, found Lewis and Boyd went in in the corner.

Jennings shook off the attentions of the Fiji defenders to add to their advantage on 31 minutes and Thurston again kicked the extra two points.

Morris gave the Kangaroos the perfect start to the second half as the Kangaroos continued to press their advantage and a Cherry-Evans break through the middle yielded another four points, with Thurston again successful with his kick.

Fiji defended bravely but found little in attack and must hope to make more of an impact when they take on England in Hull next Saturday.

Lewis stepped through a couple of tackles to score on 66 minutes but there was drama three minutes later when the Cronulla Sharks player crashed into an advertising hoarding as he tried to chase a ball and was taken off with the injury which is likely to rule him out of the remainder of the tournament.

"It's the end of Luke's tour. He's a great tourist, a great member of the squad and the boys love him. He can play a bit and he's a big loss. He's up and around now and will be sore, but we go to Ireland on Sunday and he will get settled in Manchester until we get back.

"We did look a little rusty and did some silly things, but defensively we were very good and we defended everything.

"They completed all their sets in the first half and we weren't that bad, but in the second half we were right into it. We kicked well and with the conditions so tough for both teams, we were happy with how we defended.

"We had to change our game plan because of the conditions, but the guys reacted really well and played nice and tight. We kicked well, chased well and the fact that we kept them to no tries was really nice."

"I'm really proud as we were playing the Kangaroos, a terrific side and a really outstanding team who are full of good players.

"We are disappointed with some of the things we did in attack and we perhaps needed to throw a little bit more at them. It would have been nice to come up with a try but, considering how we handled the conditions, I'm pretty happy.

"We did some good stuff but perhaps we gave them too much respect in terms of the way we attacked them. They pumped us a lot down the middle but we at least tried to make it hard for them to get their tries."