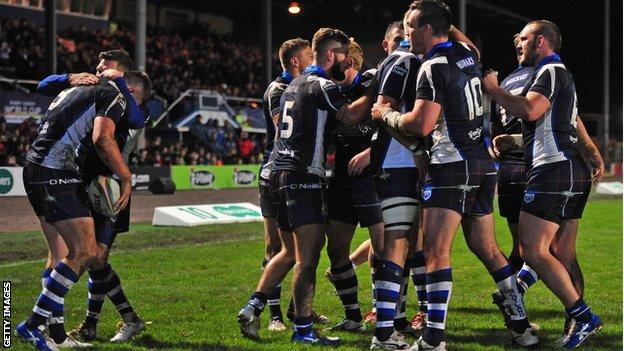 Unfancied, unheralded and perhaps underestimated. Scotland, Italy and the United States have been the success stories of the Rugby League World Cup so far.

These three World Cup also-rans are all still unbeaten after Scotland and Italy produced the match of the tournament so far.

Their thrilling 30-30 draw sets up a huge Thursday night in Salford, where the US and Scotland meet with both teams eyeing a shock place in the quarter-finals.

After a glorious drive through the Lake District on Sunday I arrived at Derwent Park at exactly the same time as the Italy team coach.

The players bounced off the bus and all immediately shivered, inhaled deeply, and sprinted into their tiny changing room at the homely old ground.

Having enjoyed the hospitality of Cardiff's Millennium Stadium last week, this was a visible shock to the system for the Azzurri. Welcome to Workington.

Scotland's coach then arrived, led in by a bagpiper, and the players strolled through in their kilts without a climatic care. Workington was expecting a full house, and indeed had the "house full" signs ready, such is the appetite for the game in a region that maintains substantial claims for a Super League franchise.

Before the game, Scotland coach Steve McCormack could not speak highly enough of the welcome his squad had received.

"This community has got behind us and the World Cup. Everywhere we have been the support has been immense. The backroom team and staff have got into the community and done their work too," he said.

As the Scotland team chatted by the tunnel a couple of hours before kick-off, it was clear this was the biggest game in the lives of many of their players.

A Scotland win would mean pole position in Group C for the Bravehearts, while a win for Italy would provide the same prize, and complete a remarkable Home Nations hat-trick following wins over Wales last week and England in their final warm-up the week before.

The USA top Group D after beating the Cook Islands and eliminating Wales from the tournament with their impressive victory on Sunday.

As the crowd filled up the old terraces and the players disappeared to get changed I hopped up to the commentary position to set up for our 5 live commentary.

Half a dozen members of the Italian coaching staff were already sitting there eating burgers and it turned out the two seats for me and our expert analyst Jon Wells were right in the middle of the group.

While being a little disconcerting, this also provided a fascinating insight into the game. There was frustration, anger, and a lot of rocking back and forth in the seats from coach Carlo Napolitano and his team as Scotland surged 14-0 ahead.

I feared this might actually take us off air. Our long radio cable was taped behind their seats, and every blow that Scotland landed brought a reaction in the Italian seats that glitched our commentary line.

The crowd was so vocal it felt like we were in Scotland, and the game was thrilling. Inspired by brilliant substitute hooker Ray Nasso, Italy were minutes from a fabulous comeback win until Super League's Man of Steel stepped up.

With the game on the line, Danny Brough produced a moment of brilliance in midfield to break play, the kind of decision that can win or lose you the game - though in this case, no less dramatically, it drew it.

His chip over the top to himself on the fourth tackle caught the great Anthony Minichiello napping and as Brough regathered to play the ball, Ben Hellewell finished off a flowing right-side break for the try of the tournament to rattle the Derwent Park roof.

Brough's touchline conversion was uncharacteristically wayward and after the exchange of failed drop-goal attempts, the hooter sounded on a draw that leaves Group C on a knife-edge.

Such is Brough's character he was beating himself up at the missed kicks after the match, not the fact that his class had kept Scotland in the game throughout.

Such was McCormack's post-match exuberance, and his dedication to promoting the sport, the Scotland coach clambered up to our commentary position at full-time to allow us immediate reaction. He was buzzing, urging anyone near Salford on Thursday to get down and watch a game with the USA that now has an unexpectedly huge amount riding on it.

I left Workington through a mass of fans waiting for Scotland autographs and drove home pondering three things. The appetite for the game in both Cumbria and Bristol has shown me there is life outside the M62 corridor, and food for thought for further Super League expansion.

Secondly I couldn't help letting my mind wander back to the Brough debate, and how good he would have been for England if he and coach Steve McNamara could have settled their differences.

And thirdly, how good is Thursday night going to be?