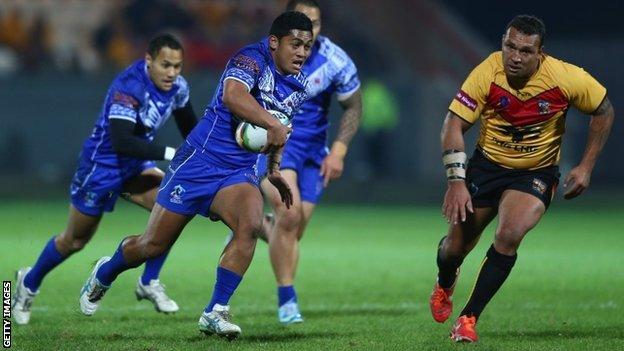 Samoa ran in seven tries to thrash Papua New Guinea and all but secure a place in the World Cup quarter-finals.

A win for the Kiwis would send France and Samoa through, with the losers of their clash on Monday likely to meet England in the last eight.

Samoa had pushed holders New Zealand in their opening 42-24 defeat and again impressed at Hull KR's Craven Park, especially as injuries left them with only 18 fit players.

Papua New Guinea had been solid in their 9-8 loss to France, but were breached by Matagi after only 67 seconds, a score to deflate a biased crowd due to Hull KR's links with PNG.

That score came from a Kumuls mistake and further errors, combined with some free-flowing Samoan play - Roberts scored under the posts after a 60m run - gave Samoa a 28-0 lead at half-time.

Papua New Guinea at least saw Nandye go over in the second half as Samoa's intensity dropped, but hey still had enough for Sue to cross and Winterstein to get his third.

Samoa head to Perpignan for the clash with France knowing that victory would give them an easier last-eight tie, probably against Fiji.

Papua New Guinea coach Adrian Lam: "Our start was really poor and that was the number one priority in the week, to start well.

"Five out of the first six sets ended with an error, and that was a problem.

"One thing we have always done in Papua New Guinea is score points and we haven't done that. We didn't handle their size and they were too big and strong."

Samoa coach Matt Parish: "I'm very pleased and I said all along that as the tournament goes on we will improve.

"Our first-half performance was as good as any other team in this tournament so far. I thought we played very well and to win a World Cup game 38-4 showed outstanding defence.

"The first half really was outstanding and we will look to improve as the tournament continues."