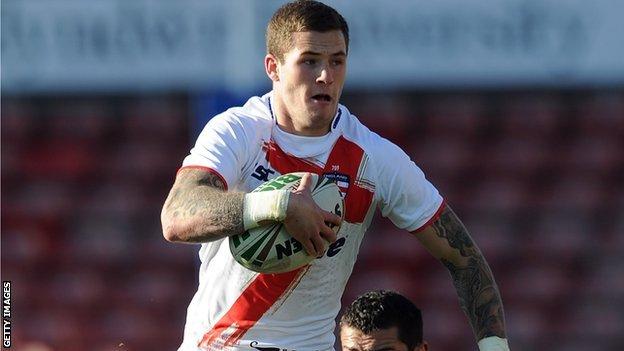 Leeds Rhinos have fined Zak Hardaker after he "acted unprofessionally" prior to his withdrawal from the England World Cup squad.

According to an England statement, the full-back, 22, left the squad on Monday because of "personal issues".

But having spoken to the England management, Rhinos have issued Hardaker with a written warning and £2,500 fine.

A statement said Hardaker had breached the club's code of conduct but would report for training on 25 November.

"We are satisfied the matter has now been dealt with," it added.

"We will continue to monitor Zak's future conduct and help him deal with his own issues; which are more to do with a lack of professionalism than anything else."

Hardaker was not chosen by boss Steve McNamara for either of England's first two World Cup matches.

McNamara initially claimed the player missed the weekend win over Ireland because he was ill.

But when it was announced that Hardaker had pulled out of the squad, the reasons given were "personal issues".

Now Leeds have added to the confusion by claiming he acted unprofessionally.

Hardaker is the second player to exit the squad after Salford's Gareth Hock was excluded for disciplinary reasons.

Hardaker has apologised for his actions.

"I have paid a heavy price and will now miss out on my dream of helping England win the World Cup," he said.

"I am sorry for any embarrassment I have caused and my focus now is on moving forward next season and putting these events behind me."