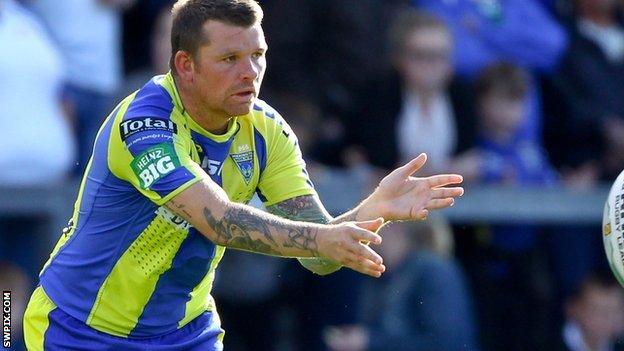 Warrington half-back Lee Briers has announced his retirement with immediate effect because of a neck injury.

The former Wales international signed a one-year contract extension with the Wire earlier this year, but has been forced to quit on medical grounds.

Briers, 35, has been assisting Wales coach Iestyn Harris at the World Cup and will now take up a full-time coaching role with Tony Smith's side.

His final game for Warrington was in October's Grand Final defeat by Wigan.

He joined the club from St Helens in April 1997 and went on to become their record points-scorer with 2,586 in 425 appearances.

Briers said: "I feel privileged to have played for so long. Unfortunately it has come to an end but it was going to one day and the doctor took that out of my hands.

"I'm sad but I've got good things to look forward to now with the coaching; my next chapter. It is something I have always wanted to focus on and now I have the opportunity to do that."

During an illustrious career Briers was capped 23 times by Wales and once by Great Britain, won the Challenge Cup three times and was awarded the Lance Todd Trophy, for man of the match in the cup final, for his display in the 30-6 win over Leeds in 2010.

Wolves coach Smith added: "On behalf of the Warrington club, its supporters and rugby league fans I'd like to thank Lee for his contributions to the game.

"He has brought enormous enjoyment and pleasure to those who have witnessed his skills."