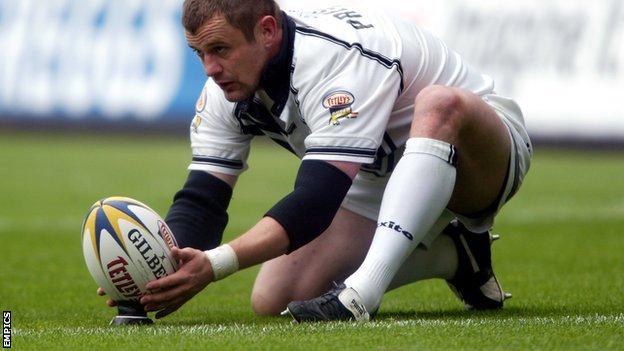 Prescott, who played for St Helens, Hull and Wakefield and for England and Ireland, was diagnosed with pseudomyxoma peritonei in 2006.

The full-back was given only months to live but battled the disease and in 2009 was awarded an MBE.

Prescott also raised thousands of pounds for charity through the Steve Prescott Foundation.

Before England's World Cup match against Fiji at the KC Stadium on Saturday, a minute's silence for Prescott turned into a minute's applause before chants of 'There's only one Steve Prescott'.

Retirement: Injured his knee while representing Lancashire against Yorkshire in 2003. Forced to retire the following year.

He retired through injury in 2004, after spending a year out of the game with a broken kneecap, and following his diagnosis set up the foundation in 2007, which has to date raised more than half a million pounds.

In 2012 he embarked on a remarkable challenge with former Great Britain international Paul Sculthorpe that consisted of running the Paris Marathon, cycling from Paris to Calais, rowing across the English Channel, cycling from Dover to London and finishing with the London Marathon. It was the third time Prescott had completed the famous London race.

Rugby Football League chairman Nigel Wood said: "Our thoughts are with his family at this terribly sad time.

"The word 'hero' is overused in sport but Steve was just that: a role model for every young rugby league player during his distinguished playing career and an absolute inspiration to all of us off the field.

"Throughout his long illness Steve was never anything other than dignified, noble and brave, not least during his fantastic charity work through the Steve Prescott Foundation which raised hundreds of thousands of pounds for good causes, including the Rugby League Benevolent Fund.

"Steve touched on the lives of a great many people and enriched both rugby league and the whole of sport with his engaging personality, unselfish efforts and his stoicism in the face of such an aggressive and cruel illness.

"We are all very fortunate to have been associated with Steve. He is going to be much missed."

"Steve was a great bloke, we knew this day was coming, he's got over so many hurdles, it's a sombre, sad day. This was one fight he just could not win but boy, he gave it his best shot.

"It will affect the whole rugby world. His first thoughts were always for other people and I'm so blessed I can call him my friend.

"He had some great days at the KC Stadium and he will be looking down on it today.

"He was such a winner. In the gym, on the field, but off the pitch he was good fun and we had some great times away from rugby league."

England Rugby League said on Twitter: "We are very saddened to hear the news of Steve Prescott who has passed away. You were an inspiration to so many."

Craig Murdock, former Hull FC and Hull KR scrum-half and close friend of Prescott, told BBC Radio Humberside: "It's a very sad day. Steve was a great bloke, we knew this day was coming, he's got over so many hurdles, it's a sombre sad day.

"It will affect the whole rugby world. Hopefully some of the players out there can put in a performance because he has done so much for the rugby world.

"His first thoughts were always for other people and I'm so blessed I can call him my friend. He was such a winner."

St Helens-born Prescott started his professional career with his hometown club and made 117 appearances, scoring 52 tries, in five seasons at Knowsley Road between 1993 and 1997.

The full-back scored two tries as Saints beat Bradford to win the 1996 Challenge Cup final and helped them retain the showpiece trophy against the same opposition 12 months later.

Prescott left Saints at the end of the 1997 season and had two spells at Hull FC, either side of a season at Wakefield, before suffering his career-ending injury in 2003.

After making his international debut with England he transferred nationalities and played for Ireland, qualifying through his grandparents.

His father Eric was also a professional rugby league player in the 1970s with St Helens, Widnes and Salford.

Prescott is survived by his wife Linzi and two children.