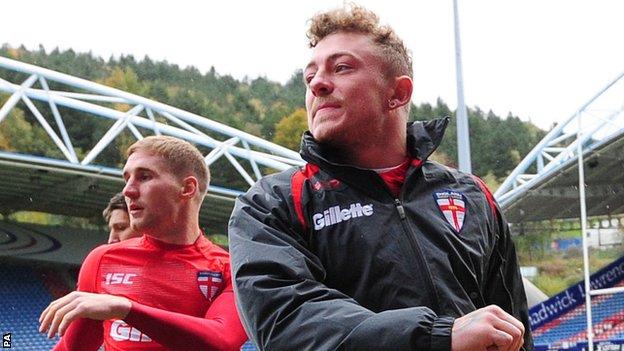 Wigan winger Josh Charnley has been recalled to the England squad in place of Hull's Tom Briscoe for Saturday's World Cup quarter-final against France.

St Helens hooker James Roby's inclusion ahead of Leeds's Carl Ablett is the only other change from the 19-man squad picked before the 34-12 win over Fiji.

Leeds hooker Rob Burrow has recovered from a head knock to retain his place.

"We have picked the strongest possible squad to take on France," said coach Steve McNamara.

Charnley, the leading try-scorer in the 2013 Super League season with 34, and Roby both started England's 28-20 defeat by Australia in the tournament opener.

England beat France 48-4 in the nations' last meeting in November 2012, and skipper Kevin Sinfield believes his side will have underachieved unless they win at least their next two games to reach the final, at Wembley on 30 November.

Asked if a semi-final exit would be a failure, Sinfield told BBC Sport: "I think it probably will, yes. I think we would have to make the final."

England lost to New Zealand in the semi-finals in 2000 and 2008, succumbing 49-6 and 32-22 respectively, and will face them again if they overcome France and the Kiwis beat Scotland on Friday.

But Leeds captain Sinfield said the focus is on beating a France side that narrowly edged out Papua New Guinea in their only win at the tournament, particularly after the shock 15-14 defeat by Italy in the build-up to the World Cup.

"I think we are all aware of what is at stake," added Sinfield. "Ultimately it is 17 against 17 and, having faced Italy and had the disappointment and embarrassment of that game, we know that lightning can strike twice.

"There will certainly be no complacency from us."

Australia meet the United States and Samoa play Fiji in the two quarter-finals on the other side of the tournament draw.