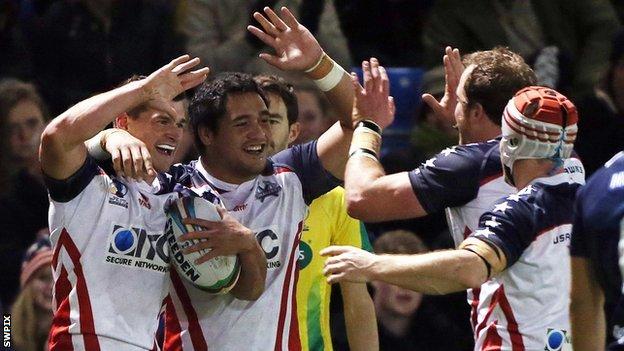 Back-row forward Mark Cantoni is set to make his World Cup debut for the USA against Australia in Saturday's quarter-final in Wrexham, just a month after breaking his arm.

The 34-year-old, who was born in Australia, is on annual leave from his surveying job in Queensland.

He suffered the injury in the warm-up match against France in Toulouse.

Reserve hooker Robbie Farah has been dropped by Australia after being on the bench for the first three games.

Half-back Daly Cherry-Evans could take his place on the bench after impressing in the last two matches, including in a man-of-the-match display in the 50-0 win over Ireland in Limerick last Saturday.

Centres Josh Morris, Brent Tate and Michael Jennings are the others to miss out, with coach Tim Sheens opting for an extended squad as cover for several injury concerns.

Former Wakefield winger Matt Petersen will be hoping to finish his career on a high against the Kangaroos.

The 33-year-old, who was born in Australia and qualifies for the United States through his grandfather, retired four years ago because of a knee problem but was tempted back into action by the prospect of a World Cup swansong and has been one of the Tomahawks' star performers.

"I was over here and then retired in 2009, but I came out of retirement to play in the qualifiers in 2011," said Petersen.

"Now I have come out of retirement again to play here and I played a season in the Gold Coast local comp to get ready. I'm just hoping the body holds together for one more game, and then I'll be happily back off into retirement.

"All these games have been the highlight of my career - and that will obviously be topped off next weekend.

"When the opportunity came up (with USA) I thought it was a great opportunity and a chance to experience international football.

"I started playing 10 nearly years ago. We played Australia in Philadelphia in 2004 and now we play Australia again. Did I think we could do this well? Not in a million years. The goal was to win a game."