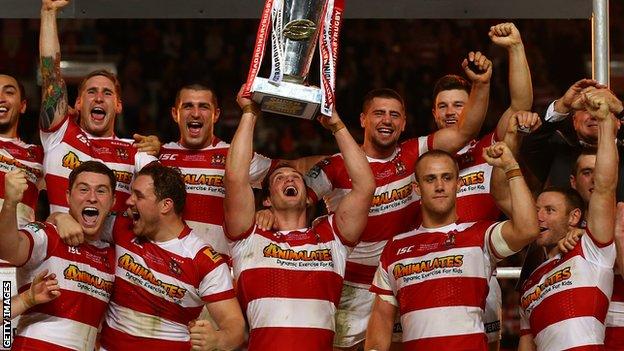 The Warriors start their season a week ahead of the other sides in order to give them a week off before the World Club Challenge against Sydney Roosters.

Troubled London begin away at Widnes.

The Broncos, who are in talks with Conference Premier side Barnet over a possible groundshare, are currently homeless and with a threadbare squad after a number of departures.

Super League teams will enter the Challenge Cup at the fourth-round stage to be played the weekend of 6-7 April. The final will be held at Wembley on Saturday, 23 August.

The regular season comes to an end on Sunday, 14 September with the play-offs, which will be contested by the top eight teams, starting the following Thursday. The Grand Final will take place at Old Trafford on Saturday, 11 October.

As it stands, the two teams that finish bottom of the regular season table will be relegated from Super League as the competition returns to 12 teams for the 2015 season.