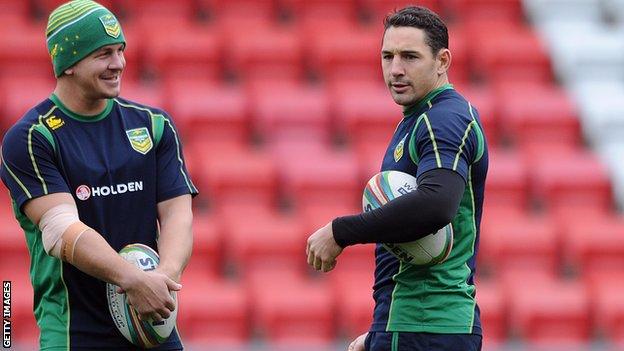 Melbourne Storm full-back Slater, 30, was arrested and questioned by police about a fight outside a Manchester bar in the early hours of Monday.

He was released without charge after officers reviewed CCTV footage.

"The police have cleared Billy and so there's no reason for me to punish him," said Sheens.

"He is disappointed that it has brought attention onto the side for the wrong reasons because of his stature in the game.

"But it is a lesson learned, even at his age, he can still learn a lesson."

Slater, who is one of Australia's key players, is expected to start for the tournament favourites against USA in Wrexham.

The Americans have been one of the World Cup's surprise packages and progressed to the last eight as Group D winners after victories against tCook Islands and Wales.

And Sheens, who saw his team top Group A after wins over England, Fiji and Ireland, insists he is aware of the dangers posed by Terry Matterson's side.

"Everyone has been surprised, but we know quite a few of their players," he said.

"Obviously they've bonded very quickly - their coach has done a great job to get them together on a shoestring budget and get them to perform.

"We've been impressed, particularly with their last two games. They lost to Scotland but it was a very tough game and Scotland got on top in the last 15 minutes.

"The quality is rising to the top."