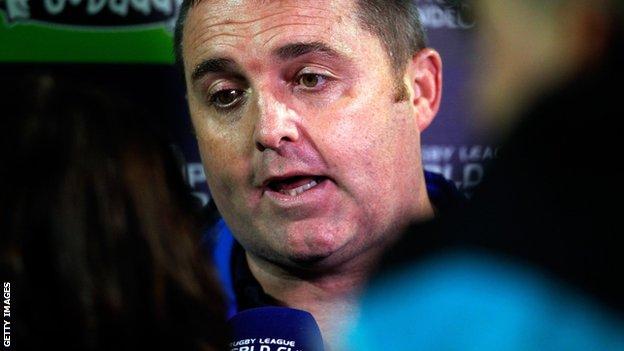 Steve McCormack has revealed he may return to club coaching after leading Scotland to the quarter-finals of the Rugby League World Cup.

The Scots suffered in Leeds on Friday evening.

"I'm full-time teaching at the moment but a few options have cropped up during the last few weeks," said the Scotland head coach.

"One of those is at Wigan, working with the scholarship kids. I'll sit down and assess everything after the World Cup."

Reflecting on the tournament as a whole, McCormack admitted he had "loved every minute".

"I've had eight months off and enjoyed time with my family but being around players like Danny [Brough] and being on the big stage like this certainly got my appetite back for the game," said the former Salford, Widnes and Whitehaven boss, who is a college lecturer in sports science.

"My lads gave it their best shot. We expected New Zealand to be that good - they are a world-class team and it will take a good side to beat them.

"The lads have given everything in this tournament, we got to the quarters for the first time in our history and I'm very proud of them.

"Everything about this tournament has been excellent for Scotland."

Scotland captain Brough believes it is important to secure a place in the next northern hemisphere staging of the Four Nations.

And the Huddersfield skipper hopes the Scots can retain the services of their Australia-based NRL players.

"We've got to try and push on and get in the Four Nations," said Brough.

"Hopefully we can get Peter Wallace, Kane Linnett and Luke Douglas back over because they've been outstanding for us.

"If we have a decent team next year and a good crack, you never know."