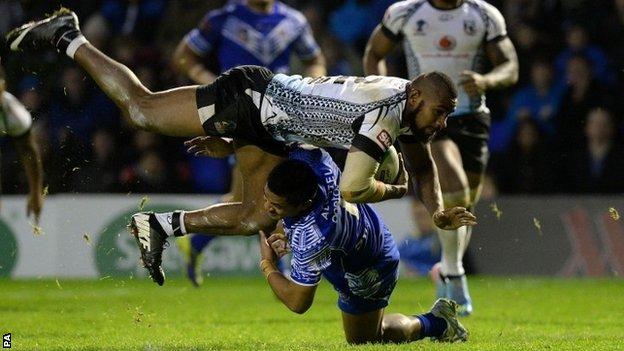 Fiji will meet Australia in the World Cup semi-finals at Wembley next Saturday after a battling win over Samoa in Warrington.

Aaron Groom and Wes Naiqama both scored first-half tries while Vitale Junior Roqica went over later in the game.

Naiqama converted all three tries and kicked two penalties for the Fijians, who played with greater composure.

Antonio Winterstein scored the only try for Samoa, who lost Penani Manumalealii to injury in a disappointing display.

Ties to be played on 23 November at Wembley Stadium

Fiji will now hope to do better than the 54-0 drubbing they received from the Kangaroos in the 2008 semi-finals.

Akuila Uate played a key role in the opening try, breaking through the Samoa line and passing inside for the supporting Groom to cross. Naiqama converted and added a penalty three minutes later.

Samoa were dealt a blow when half-back Manumalealii was forced off and they struggled with their shape thereafter.

Fiji enjoyed the better of the possession in a bruising encounter and extended their lead eight minutes before the break when Groom's kick was missed by the Samoa defence and Naiqama went in for a score he also converted.

Samoa found it hard to test the Fiji line but finally got their challenge up and running on 58 minutes when the ball was played across the line for Winterstein to dive in out wide, but Anthony Milford narrowly missed the touchline conversion.

The try lifted Samoa but Fiji inched further ahead 12 minutes from time when Tim Lafai was penalised and put on report for a high tackle on Jayson Bukuya and Naiqama kicked the penalty.

And Roqica ensured Fiji go into their semi-final on a positive note by crossing with two minutes remaining after a darting run from Akuila Uila and an offload from Apisai Koroisau.

Australia reached the last four with a thumping 62-0 defeat of the USA on Saturday.

"It's great feeling to know that potentially my last game will be played at (one of) two amazing venues.

"I feel I've been very blessed. I started this rugby league ride in 1998 and to be still here, I feel very proud of that.

"I'm really looking forward to enjoying the week, taking it all in with my team-mates."

"We didn't play that well but overall I'm happy with the tournament.

"Unfortunately we came up against a better team on the day but personally it has been one of the best five weeks of my life."