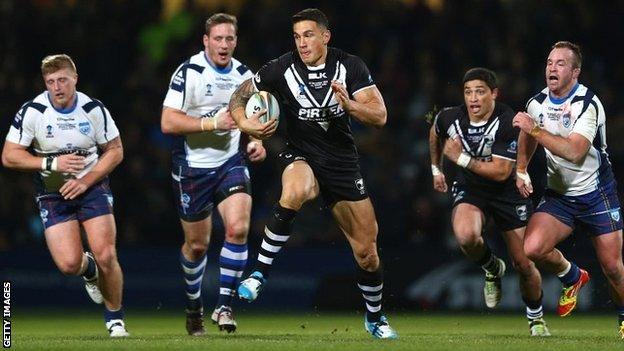 "Don't you worry about New Zealand, they are a very good side, with class running throughout it. It is going to be a very difficult task for England to beat them next weekend."

The words of an Antipodean with a typically low opinion of rugby league up our way? Hardly.

It is the verdict of England prop James Graham, who plays for Canterbury Bulldogs in the Australian NRL, the league from which every Kiwi at the World Cup has been selected.

Graham himself is club team-mates with New Zealand props Frank Pritchard and Sam Kasiano. In other words, he knows what he is talking about.

But if you think that the former St Helens man is being in any way unpatriotic, a look at the form of the team England will meet in their World Cup semi-final at Wembley next Saturday suggests that he is bang on the money.

Take, for example, the Kiwis' try count - eight, eight, 10, eight. It might resemble a gymnastics scorecard, but 34 in four games hints at a team rich in attacking weaponry.

Their big men can smash opponents all over the place but the 50 offloads Stephen Kearney's team produced during their three group games shows they have a toxic blend of skills and invention as well.

None of them come with a greater profile or reputation than Sonny Bill Williams.

A tournament-high 13 offloads so far, the player with the X-factor, the biggest draw in the game - SBW is having a memorable World Cup. The nonchalance and dismissive ease with which he swatted Scotland's Alex Hurst to the floor during the Kiwis' 40-4 quarter-final win hinted at a man in supreme command of his powers.

Even their backs pack a punch, as the Bravehearts found out during one particularly devastating run from winger Manu Vatuvei, all 17st 6lbs of him.

All of the above create the conditions in which hooker Issac Luke flourishes. He has made 509 metres so far, a substantial chunk of that on the back of quick play-the-balls after barraging runs from his forwards.

"Issac is in great form, one of the form players at the World Cup and a main focus for us," said England's Sam Burgess, the hooker's team-mate at South Sydney Rabbitohs.

"He is very influential for them, we have to do a good job on him."

New Zealand are defending champions and are starting to look like a team who could easily retain their crown.

But here is the rub - they look like that, but it is difficult to know just how good they are because they have not been under any pressure in the tournament.

So far they have played Samoa, France, Papua New Guinea and Scotland - and blitzed all of them in quick order.

Of the 186 points they have scored, 138 have come in the first 40 minutes. They have conceded only four points in the opening 40 minutes of their four games but 34 after the restart.

Could it be that a route to the last four offering fewer obstacles than a speed bump in a 30mph zone will actually work against them?

Possibly, but there is little doubt that England need to vastly improve on their performance against France if they are to topple the champions.

Coach Steve McNamara's team might have won 34-6 on Saturday but they fell behind to a team that had only managed two tries in their previous three games and England were average at best on a wet night in Wigan.

They spilled the ball, they failed to complete their sets and after scoring four tries in 19 first-half minutes, they were not clinical enough against a tiring French side after the restart.

McNamara admitted it, captain Kevin Sinfield likewise and, indeed, every England played who was asked the question.

"We cannot give a team with the strike power the Kiwis possess easy, cheap ball," added Graham. "We need to work on completion and [cutting out] handling errors."

Burgess was equally forthright, noting: "After the performance against France we need to look at ourselves, the further we look away from our group [and at the Kiwis], we might become distracted. We have got to be accountable as individuals and knuckle down."

England are arguably a more battled hardened side, having played favourites Australia in their opening game and, after brushing aside Ireland, battling from behind against Fiji during a testing opening half in Hull.

And they do have a decent record against New Zealand, winning their last two meetings on these shores.

But that will count for little on the wide-open field at Wembley if England cannot execute the basics of completing their sets and building pressure. The Aussies will tell you that the Kiwis' physical strength can also be their weakness - and England need elusive, slippery players such as Sam Tomkins to run at them and tire them out.

Despite the disappointing performance against France, there remains a firm belief inside the England camp that they will rise to the challenge of playing New Zealand.

As Graham put it: "These sort of games normally bring out the best in England."

After a slew of one-sided quarter-finals, Saturday's semi-final between England and New Zealand is a mouth-watering prospect. It will be followed by Australia taking on Samoa or Fiji but it is the first game that really intrigues.

For England and New Zealand, the bullying is over. The one-sided shellacking of second-rate teams is at an end. The phoney war has come to a close.

By 3pm next Saturday, Australia and their opponents will be warming up for their semi-final, but someone will have already left the party before the final dance, left to wonder what might have been.

Brace yourself for a ballet of beauty and brutality.