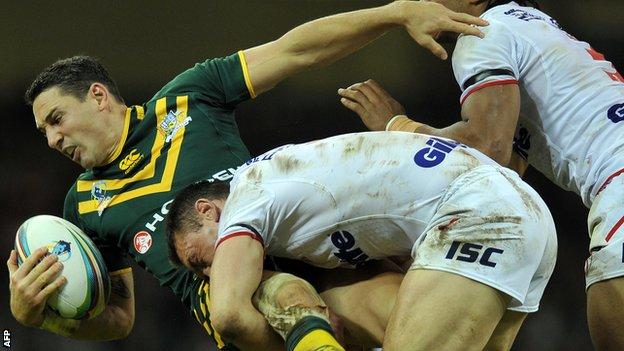 Australia have ruled Billy Slater out of next weekend's World Cup semi-final.

The Melbourne Storm full-back aggravated a knee injury in the Kangaroos' 62-0 quarter-final win over the United States and was forced off the Wrexham pitch in the second half.

"The injury to Billy Slater is a massive worry for Australia but they have great strength in depth and he can be replaced by Greg Inglis who is such a strong player and possibly more dangerous at full-back than centre."

South Sydney's Greg Inglis is likely to replace Slater in the starting line-up.

If Australia beat Fiji in the last four at Wembley, they will meet England or New Zealand in the final at Old Trafford on 30 November.

Queensland-born Slater, who missed the final match of the 2012 State of Origin Series and six club games after straining his posterior cruciate ligament, was injured in a tackle and went for a scan on Saturday evening.

The 30-year-old's left knee was too swollen to gain a clear diagnosis, said an Australia team spokesman, who confirmed Slater would also be doubtful for the final, should the Kangaroos reach it.

When it comes to full-back, Australia have two other options in addition to Inglis, who switched effectively against the Tomahawks following Slater's departure.

Jaryd Hayne of the Parramatta Eels and Newcastle Knights' Darius Boyd play full-back for their National Rugby League clubs but play in the three-quarter line for their country.