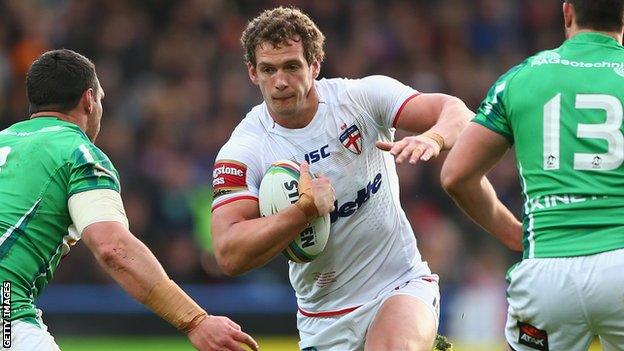 Steve McNamara's side are aiming to reach the final for the first time since 1995 by beating the defending champions in London on Saturday.

"New Zealand are defending champions and are starting to look like a team who could easily retain their crown. But here is the rub - they look like that, but it is difficult to know just how good they are because they have not been under any pressure in the tournament."

"We know we can get a lot better and I think playing at Wembley will get a lot more out of everyone," he said.

"I think the venue itself can get the better of you sometimes.

"But there are a lot of players in the squad who have been there - the Wigan, Warrington and Leeds lads have all played there [in Challenge Cup finals].

"I wouldn't say they're familiar with it, but they've been there and I think it could be a bit of an advantage."

England reached the semi-finals with a comfortable 34-6 victory against the French on Saturday, but were far from impressive for long periods of the match.

Coach McNamara conceded afterwards that it was his team's "worst performance of the tournament".

They qualified for the quarter-finals as Group A runners-up after their opening defeat by favourites Australia was followed by comprehensive wins against Ireland and Fiji.

Group B winners New Zealand, who beat Australia in the 2008 final, have eased into the semi-finals by beating Samoa, France, Papua New Guinea and last-eight opponents Scotland.

They are the tournament's leading scorers, having amassed 186 points in their four games, scoring 34 tries.

"They're probably the most impressive team in the tournament," added O'Loughlin, 30.

"If we perform like we did against France, we will probably get more points put on us than we did on Saturday.

"It was still a convincing win, but it was a bit disappointing performance-wise.

"We will have to raise our performance if we want to get to the final. We scored some nice tries but we gave up too much ball and at times we didn't defend well enough."