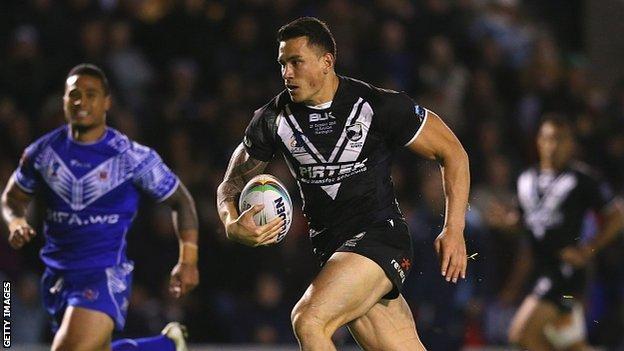 Sam Burgess could only have looked more bullish had he been wearing a ring through his nose and shooting steam from his nostrils. Head down, ears cocked, hooves churning the turf. Some poor soul had strayed onto the wrong field.

By the time Burgess was brought down - it needed three brave men - there was a Sonny Bill Williams-shaped hole in the ground. The message from Burgess was clear: "Things have changed since you left, lad - this is my paddock now."

The occasion was the opening round of last season's National Rugby League and Williams, playing his first game of rugby league for five years, was fresh from the Sydney Roosters bench.

But it was England and South Sydney Rabbitohs enforcer Burgess who represented the shock of the new and Williams's side slid to a 28-10 defeat.

"In rugby union I was out wide kicking stones with the pretty boys," says Williams. "So it was tough making tackles in the middle." But the 28-year-old is nothing if not adaptable. A world champion with the All Blacks, a part-time heavyweight boxer, he learns hard and fast and leaves the rest behind.

In the return, an inspired Williams was man of the match as the Roosters beat Burgess's Rabbitohs to finish top of the table. The Roosters went on to see off Manly Sea Eagles in the Grand Final, willed on by more of his wizardry.

Now for the decider - the Rugby League World Cup semi-final between England and New Zealand at Wembley on Saturday. Otherwise known as Burgess-Williams III - When Monsters Collide. Tighten up those neck braces.

Asked about his rivalry with Burgess, Williams replies: "He can definitely hold his own." Outwardly shy, softly spoken, he doesn't do trash-talk or hype, despite his brushes with the ring and outlandish deeds on the rugby field.

Yet there are those who still have him down as a silent but deadly mercenary. Humble of demeanour, hungry for a buck. Out for self-improvement, when it suits himself. Not least fans of Canterbury Bulldogs, on whom he walked out in the middle of the 2008 NRL season.

"I was young and stubborn and thought I was in the right," says Williams, who broke his contract to take up a lucrative offer with newly rich French rugby union outfit Toulon. "If I could go back and change how I left the NRL, I would. My name will forever be tarnished but I wasn't the man I am now."

He was barely a man at all, it only seemed that way. Having made his debut for the Bulldogs at the age of 18, and his debut for New Zealand after a handful of club games, he soon cemented a reputation as one of the most electrifying talents in the NRL. "If he was a racehorse," said former Kiwis coach Frank Endacott, "you'd already be lining him up for the Arc de Triomphe."

"Sonny is a very nice and humble guy. He is an impressive human being, the way controls himself on and off the pitch is a credit to himself and NZ. I have a lot of respect for Sonny. It is great for the game that he is at the World Cup and it will be tough to control him on Saturday but we are looking forward to the challenge."

But between the ears, Williams was not much different to the self-proclaimed "mother's boy" who left Auckland for Australia at the age of 15.

"Being a young Kiwi lad, a young Polynesian boy, I was pretty close to my family," says Williams, the youngest player ever to sign for the Bulldogs. "But when I moved to Sydney I went from training twice a week, playing touch footy with my mates, to working full-time as a labourer and training professionally.

"I'd leave home when it was dark and get home when it was dark. But home didn't really feel like home. We had an old lady and old man who looked after our house, which had eight boys living in it. I was still becoming a man when I left the Bulldogs and I didn't have the support system I have now."

Williams denies he moved to France purely for the money, claiming instead that club politics forced him out of Canterbury. But even reports he paid the Bulldogs $750,000 (about £340,000 at the time) to release him from his $400,000-a-year contract failed to mollify his critics, given the relative riches on offer at Toulon.

However, as much as he bungled his exit, his wish to make big money fast is understandable given the nature of his formative years in Auckland.

"I grew up just wanting to do well for my mother," he says. "Seeing my family struggle when I was young was a massive drive for me."

He signed for Toulon only months after hooking up with maverick manager Khoder Nasser, the man in charge of rugby league star turned boxing world champion Anthony Mundine.

Nasser oversaw Mundine's transformation into one of the most polarising sportsmen in Australia but knows the value of athletes. He also manages Wallaby fly-half Quade Cooper, another sportsman who divides opinion.

Back in Australia, Williams, too, had forged a reputation as something of a wild man. There was a charge for drink driving and an incident in a pub toilet with ironwoman Candice Falzon. But Williams got to know himself in the south of France, embracing Islam and giving up alcohol.

"A lot of my close mates in Sydney were Muslims, including Khoder and Anthony [Mundine]," he says. "But it fell into place when I got to know a Tunisian family in Toulon, a couple and five kids in a one-bedroom house.

"I had this big house but I spent most of my time with them, they were so happy and content. Becoming a Muslim helped me on the inside, I've become such a happy person."

On the field he struggled in his first season, with injuries and the complexities of union. But he was surrounded by good teachers, including England legend Jonny Wilkinson, who recognised his team-mate's genius.

"The first year in France I was pretty much busted," says Williams, "so I didn't think I could play rugby union. But I was playing alongside men like Jonny Wilkinson and [former All Blacks captain] Tana Umaga and holding my own.

"Jonny telling me I was a great player was a big boost. At the end of the first season I made up my mind I was going to give it a crack."

Williams decided not to extend his contract with Toulon and signed with the New Zealand Rugby Union instead, for far less money. All the more remarkable given the All Blacks tend not to court players, believing it beneath them.

In November 2010 he made his All Blacks debut against England at Twickenham, becoming the first man for almost a century to represent New Zealand in rugby union after first playing for them in rugby league.

Williams dazzled as an All Black, quickly garnering a reputation as the most magnetic talent in the 15-man code. A triple threat of pace, brawn and vision, he gave the impression he could offload out of a collision with a freight train while putting the freight train out of commission.

Having helped the All Blacks win the World Cup on home soil in 2011, he was well placed to become a bona fide saint of New Zealand's state religion. But he fancied a spell in Japan instead, after which he returned to league, second to union in a nation's hearts but his first true love.

Regrets, he's had a few, but he continues to do it his way. In between all the globetrotting and the code-crossing, the 6ft 4in, 17-stone Williams has packed in six pro boxing bouts, winning all of them, three by way of knockout. He's not much cop, by his own admission, but it still takes some doing.

"Hopping in the ring is so scary, so mentally draining," he says. "I'll never be a world-beater but the biggest thing I've gained from boxing is mental strength, which has helped me tremendously on the field."

Should Williams help New Zealand retain the Rugby League World Cup he will become the first world champion in both codes and arguably the greatest sporting polymath of all time, perhaps even eclipsing CB Fry.

Fry played cricket and football for England, rugby for Oxford University, Blackheath and the Barbarians, held the world long jump record and was once reportedly on the shortlist for the throne of Albania. But he was a product of the Victorian era, playing it mainly for larks. Larking is not in the Williams lexicon.

"I look back with pride on the fact that wherever I've gone and whatever I've done I've put my best foot forward and given my all," he says. "I'm a very content man. Not a perfect man, but moving in the right direction."

Any more perfect and he might start receiving phone calls from nations in need of a monarch. 'King Sonny Bill' - it has a certain ring to it.