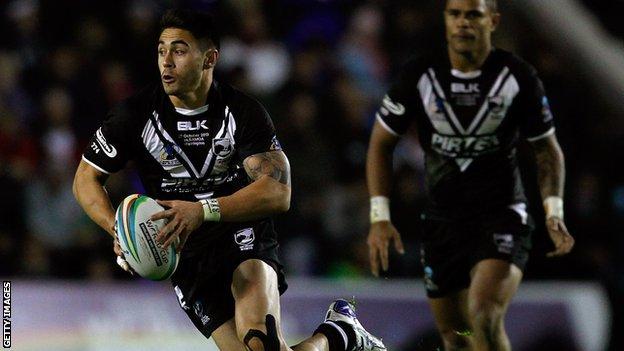 New Zealand half-back Shaun Johnson says England's Sam Tomkins has a "point to prove" when the two sides meet in the World Cup semi-final on Saturday.

Johnson plays for the New Zealand Warriors, who paid a world-record fee to sign Tomkins in September.

Full-back Tomkins, tipped to be one of the stars of the World Cup, is yet to score a try in the competition.

"There has been a lot said about facing Sam and I am sure he will be wanting to prove a point," Johnson told BBC Sport.

Despite not crossing the try-line, Tomkins has provided seven assists for his side - second only to New Zealand stand-off Kieran Foran.

Shaun Johnson on being compared to Kiwi greats

"It was said a while ago - but I am a few years into my career now so I am able to deal with that pretty well. I have had a lot of good people around me to help me out with that and just looking to do my role in the side which I feel is much different to what Benji Marshall and Stacey Jones did. I want to create my own path in the team."

And the 24-year-old could come up against full-back Kevin Locke, a man he will compete with for the number one jersey in Auckland.

Benji Marshall's decision to switch codes to rugby union ahead of the event - leaving Wests Tigers for Auckland-based side Blues - meant Johnson was able to claim his place in the halves alongside Manly's Foran.

The 23-year-old, who has been compared to Marshall and New Zealand great Stacey Jones, has played a starring role for his country so far, kicking 25 goals in four games - the highest conversion rate of any player.

New Zealand beat England 32-22 at the same stage of the tournament in 2008, and Johnson is looking to test himself against the host nation.

"You always want to play against the best players in the world," he said.

"We are getting into the business end of the tournament now and this is where it all counts, so we are ready to go for it.

"We are all determined to win the cup again and repay a lot of people for following us. I want to see us do well."

Meanwhile, Kiwi centre Bryson Goodwin says it will be "fun" playing against his South Sydney Rabbitohs team-mates, the Burgess brothers.

West Yorkshire boys Sam, George and Tom have been selected in the England side, but eldest brother Luke missed out on a place in Steve McNamara's squad.

Goodwin, 27, has predicted an "awesome battle" in London and has praised the impression the four siblings have made down under at the NRL side.

"The Burgess brothers have made a massive impact in Australia," he told BBC Sport.

"They have all played excellent rugby this year and are only young boys, so will just get better and better, which is a good thing for Souths.

"They love Australia, they are great characters to be around and it will be good against them.

"It is always fun playing against your club team-mates and I am excited about it."