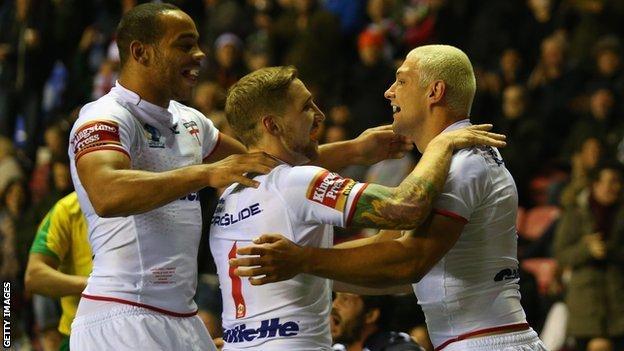 England coach Steve McNamara believes his side will be inspired by facing New Zealand in their World Cup semi-final.

The Kiwis, who are defending champions, have won their four matches comfortably - while England were unconvincing in a 34-6 quarter-final victory over France.

"I think we play a whole lot better when there is an element of fear in the back of our minds," said McNamara.

"Playing really good opposition brings the best out in you. These boys are definitely up for it, I guarantee it."

England have not reached the World Cup final since 1995 and McNamara has a fully fit squad to choose from for the match at Wembley Stadium.

New Zealand are the tournament's leading scorers with 186 points, scoring 34 tries in their four wins.

"They've been really good and blown all the opposition away," said McNamara.

"They've had some teams who have been highly motivated to play against them but they haven't been able to do that because of what the Kiwis have done to them.

"It's great credit to them that they are in the form and position they are in."

He added: "I'll pick the strongest team I feel is suited for this game. I think the Kiwi opposition are slightly different to what the French were."

McNamara hopes the experience some of his players have had of playing at Wembley in the Challenge Cup final can work in his side's favour.

"Playing at our national stadium is not something the England rugby league team does very often and it really is special," he said.

"New Zealand are defending champions and are starting to look like a team who could easily retain their crown. But here is the rub - they look like that, but it is difficult to know just how good they are because they have not been under any pressure in the tournament."

"We played Australia two years back and it was a great occasion but this is a World Cup semi-final. This is probably as good as it gets.

"Hopefully it will swing a very close game in our balance. We know from Challenge Cup final history that it is different and it can do strange and wonderful things to teams and individuals."

New Zealand half-back Kieran Foran has picked out several threats in the England side.

"Sam Tomkins is a danger, he seems to be their X-factor, while Kevin Sinfield controls them and gets them round the park," said Foran.

"Then you've got Rangi Chase off the back of that who can offer a bit of razzle-dazzle as well.

"I think Sam Burgess is a really big leader of their pack, so we're going to have to do a job on him."

He added: "Everyone's been in great form. We've hit our straps running and we're playing the sort of footie we need to be at this point.

"But we're not taking anything for granted against a great England side."