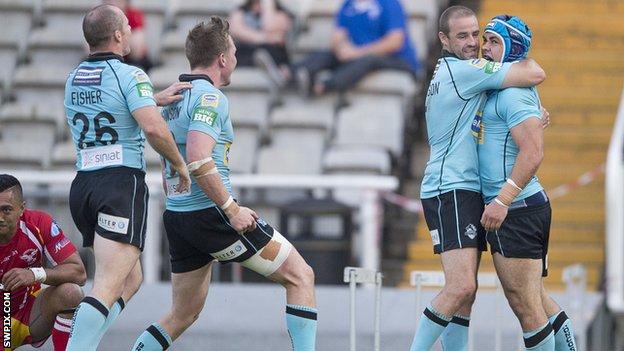 London Broncos have announced their intention to go into administration.

The Super League side have not yet secured a venue for their home games next year, and have also seen a raft of players and backroom staff leave the club this off-season.

1996: With the advent of Super League, London Broncos move to the Valley, home of Charlton Athletic football club

1997: The team finish second in the Super League

1999: Broncos reach the final of the last Challenge Cup final to be played at Wembley before its redevelopment, losing 52-16 to Leeds.

2005: The club partners with Harlequins rugby union side and changes name to Harlequins Rugby League, basing itself at the Stoop.

2013: The Broncos finish 13th, last but one, in Super League and suffer the loss of captain Tony Clubb, Luke Dorn and Dan Sarginson before the start of the 2014 season.

And after being included in next season's fixture list, they have asked lawyers to appoint administrators.

"This will allow 10 working days for the club to work with the Rugby Football League," a statement said.

"[It] will prevent any creditor from taking action against the club in this period."

BBC London 94.9 also understands that none of the remaining players, staff or academy members were paid on Wednesday, the day they were expecting their monthly salary.

The Broncos, who finished second-bottom of the Super League last season, only have five players currently on their books.

Club captain Tony Clubb, experienced utility back Luke Dorn and head of youth performance Phil Jones are among those to have left since the season finished.

Since leaving the Twickenham Stoop, the club have been linked with a move to Barnet FC's new stadium, with the Conference Premier club's chairman Tony Kleanthous confirming last week that talks have been held about a possible groundshare at The Hive.