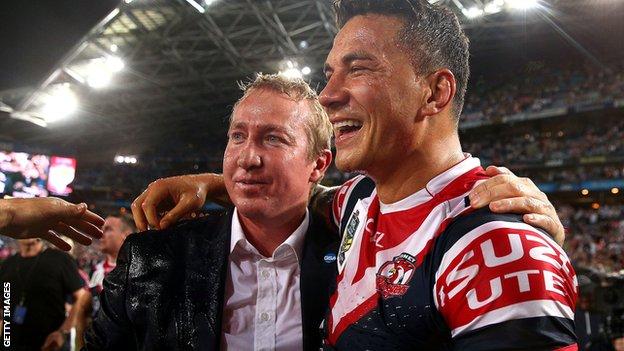 The respective champions of Super League and Australia's National Rugby League will meet at the Allianz Stadium in Sydney on Saturday, 22 February.

It will be the first time the annual fixture has been staged down under since Wigan beat Brisbane in 1994.

"This will be a big occasion," Robinson told BBC Radio Manchester.

"We like having the English down here. We haven't had the chance a lot in the past, even with Test matches. It's been a bit of a dry spell for those games within Australia so I think there will be huge interest in that game."

Since the resurrection of the World Club Challenge as a one-off game between the champions of England and Australia in 2000, all of the matches have been played in the United Kingdom.

in the last fixture in February and Robinson, who had a successful spell at Catalan Dragons before and winning the domestic title in his first season with the Roosters, says it is always a good test for NRL sides to face the best teams in Super League.

He continued: "The guys would have been excited to travel over to England, but I know they're very excited to showcase it back here as well.

"There's a lot of respect for Wigan, Warrington, St Helens, Leeds - those four clubs have really pushed the limits over the years.

"For it to be one of those clubs is exciting and it's good for the image of Super League to have such a big name like Wigan coming down."

to secure the Super League crown, while Sydney beat Manly Sea Eagles to claim their first NRL title since 2002.