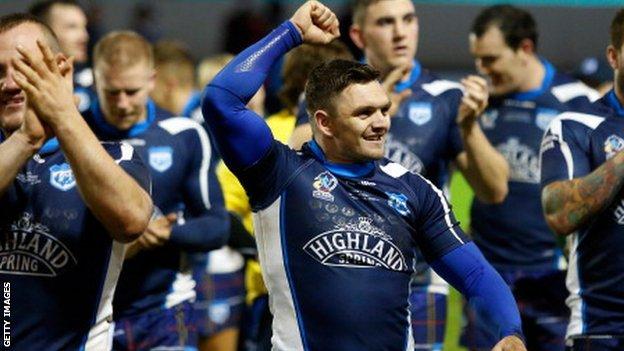 Scotland half-back Danny Brough has been shortlisted for the 2013 International Player of the Year award.

The 30-year-old Huddersfield player is in the running for the title along with Australia's Greg Inglis and New Zealand's Sonny Bill Williams.

Brough captained Scotland to the quarter-finals of the World Cup after being overlooked by England.

England's George Burgess is up for Rookie of the Year and Wigan's Shaun Wane for Coach of the Year.

In addition, England's Richard Silverwood has been nominated for the International Referee of the Year prize.

The winners will be announced at the Rugby League International Federation dinner in Manchester on 27 November.

Brough won the 2013 Super League Man of Steel award last month after a season in which the Giants won the League Leaders Shield - the first time they have topped the table in 81 years.

Former Hull, Castleford and Wakefield half-back Brough - born in Dewsbury - broke Ben Gronow's Huddersfield club record of 147 goals in a season, which had stood for 93 years, and Pat Devery's record for points in a season, set in 1953.

The winners will be announced at a dinner in Manchester on 27 November.