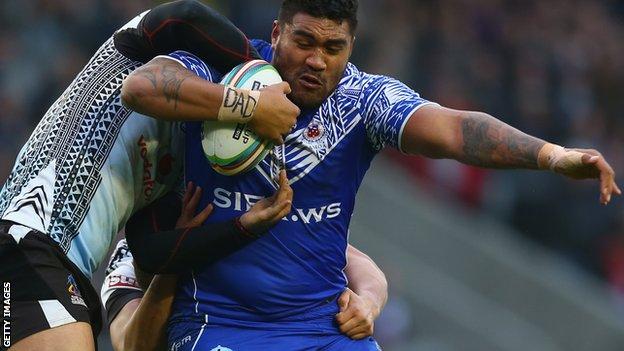 Masoe, 24, joined from NRL side Penrith Panthers, and made four appearances for Samoa at last year's World Cup.

"It's frustrating but one wise man said 'it's not how you take off, it's how you land'," said Masoe.

"Hopefully it's a little hiccup. They chuck a couple of screws in and it's meant to be good forever."

Coach Nathan Brown has bolstered the side's pack with the signings of Masoe, Richard Beaumont and Kyle Amor, as well as bringing in half-back Luke Walsh and Matty Dawson.

Masoe is expected to make a big impact at Langtree Park with his rampaging runs and crunching tackles and could make his debut in March.

"I'm not the fittest player but I'll give it my all when I get on the field," he said. "Like any player, you like to get on there and rip in.

"I'm a player that loves to play off the fans, I just want to run harder and run faster and tackle harder.

"Mose is obviously quite a big lad," he said. "We hope he can provide a nice platform for James Roby and Luke Walsh and those guys to play off.

"Luke is obviously a really important signing. I'm hopeful he can provide something I feel the club has lacked since Sean Long retired."