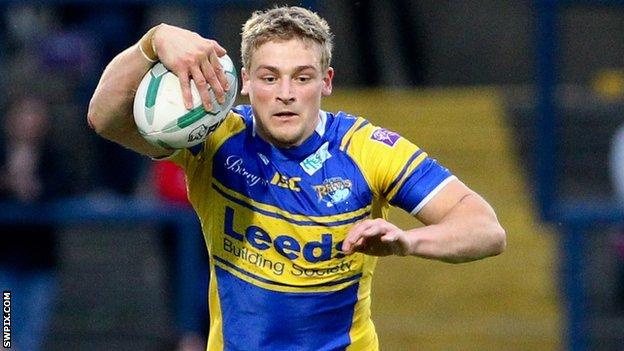 Leeds Rhinos centre Jimmy Keinhorst is hopeful his loan switch to Wakefield can help him to develop his game.

The 23-year-old Germany international joined the Wildcats on a season-long loan, alongside Rhinos team-mate Luke Briscoe, on Wednesday.

He told BBC Radio Leeds: "I know there'll be competition for places here and I'll need to be on my game.

"Hopefully I can get some consistent games in the centre and I'd like to get some quality games there."

He added: "I was in and out of the team at Leeds last season and didn't get a run of games in my favoured position.

"There are bits of my game that I need to work on and hopefully playing every week will help me build some confidence, which I think is key."

The Wildcats have gone through a transitional pre-season with scrum-half Tim Smith, hooker Paul Aiton and winger Ben Cockayne sold to Salford, Leeds and Hull KR respectively as the club looks to balance the books.

Despite the changes in personnel, Keinhorst is confident the Wildcats can compete well in the forthcoming season.

"There's bags of quality here and some really talented individuals," he said.

"I've only been around the lads a couple of days but I've seen some really positive stuff."

Richard Agar's side start the season with a trip to big-spending Salford on Sunday, 16 February.